What’s So Funny? New Professor Explores What Comedy Tells Us About Ourselves “Comedy allows us to talk about really hard things,” said Katelyn Hale Wood, an assistant professor of theater studies who joined the University of Virginia’s Department of Drama this fall. She’s teaching “Performing Race and Citizenship in 21st Century USA” this semester, as well as courses on theater history and modern drama, and “Comedy and Protest” next fall.

“Oftentimes, what we find funny or what we find offensive is informed by our politics, as well as our place in the world,” she said. Comedy harnesses the complexities of history and identity, and offers the opportunity for shared understanding in expressing joy and pain. It has a lot to teach us if we think about it after the laughter subsides.

Wood earned her Ph.D. in theater history and criticism with an emphasis in African-American studies from the University of Texas at Austin in 2014. Prior to her new position, she taught in the Theatre History and Theory program at Miami University.

UVA Today talked with Wood recently about some of the lessons conveyed in comedy and live performance.

Q. I understand you study diversity in theater and comedy. How did you get into this field?

A. Performance for me has always been a potent form of persuasion, a vibrant way we can see ourselves and also see what we want our world to look like. Performance (at its best) is a way to truth-tell.

My master’s degree is in rhetoric and my undergraduate degrees are in rhetoric and gender studies. When I was at the University of Texas-Austin, I became involved with the theater department and the performance studies department, so when I went on to my Ph.D., I decided that’s where I wanted to be because it was a department that was both analyzing and making work that was topically and aesthetically relevant. 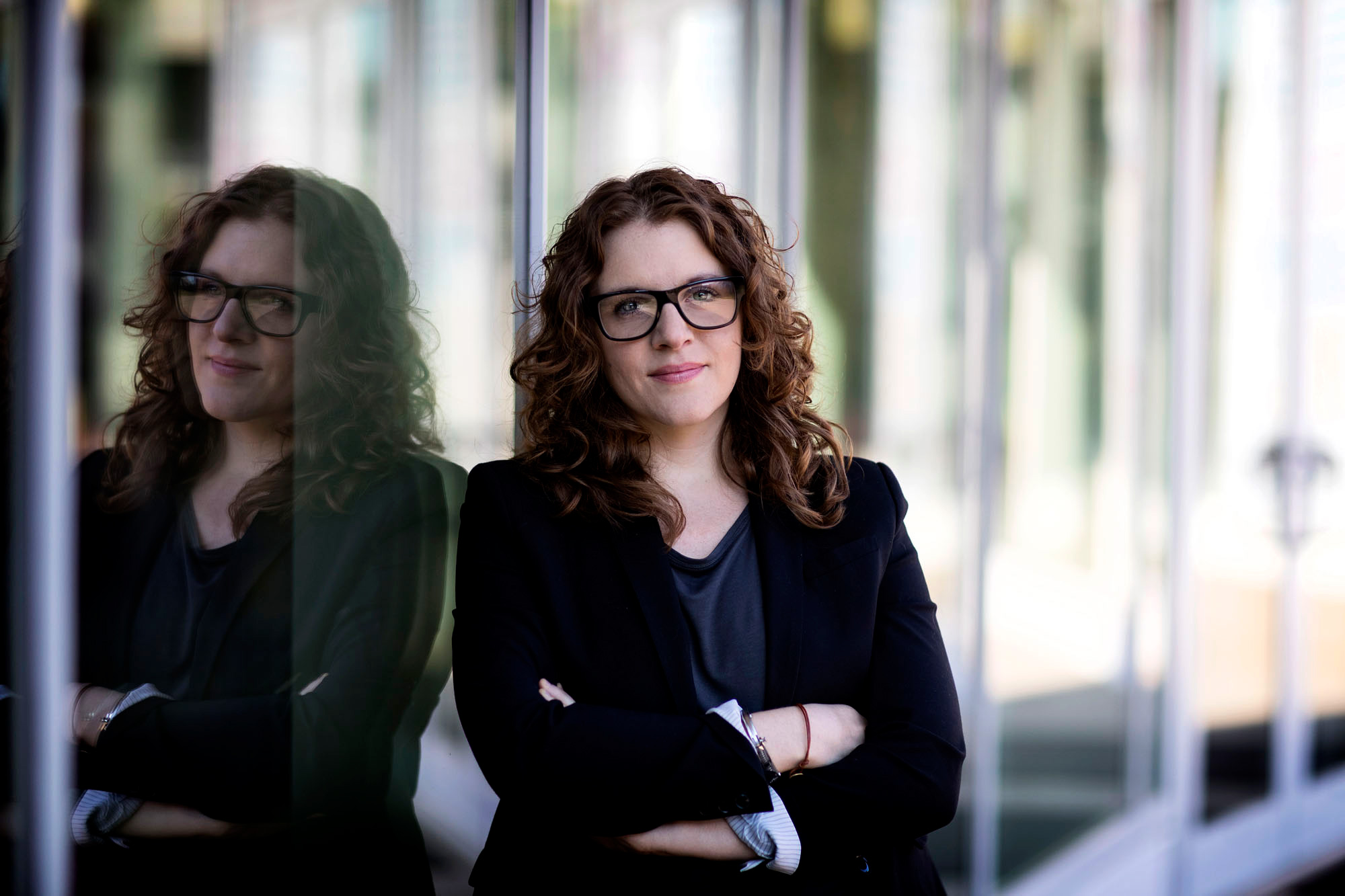 Q. What is your current research?

A. As a performance studies scholar and a cultural historian, I’m broadly interested in what performance does both to reflect and shape identity markers such as class, race, sexuality, gender and citizenship. Performance is also a powerful tool to push against systems that regulate what those very identity markers “should” or “can” be.

My current book project studies stand-up comedy as a vital mode of political protest. Through archival research and performance analysis, the book documents the work of black women standup comedians from the U.S. including: Wanda Sykes, Jackie Mabley, Mo’Nique, Sam Jay, and Sasheer Zamata (a UVA alum). I argue that their black feminist comedic performances “stand up” in the face of, and against, historical legacies of racialized and gendered violence, and provide opportunity for joy as a mode of resistance.

Part of my motivation for this project is an archival one – to document the labor and talent of artists who do important intersectional work. By that, I mean comedians who have addressed, or are addressing, the way that race, class, sexuality affect what citizenship means or how it is experienced.

For example, someone like Jackie “Moms” Mabley is a figure who has been left out of theater history narratives. Mabley is often considered the first black American female comedian; she performed sold out shows at the Apollo Theater more than any other woman of her time. She had a 60-year-long career, and passed away in 1975.

Her character, “Moms,” was a Granny who dressed in a housecoat and hit on younger men in the audience, but off-stage, she was a lesbian, and dressed in men’s suits. What happens when we remember somebody as a persona? Well, we erase the labor that goes into performance and the critical work that comedy does. So if Mabley couldn’t be “out” on stage – well then, she [used] a form of brassiness in a way that was culturally acceptable, and used her celebrity to preach messages of the Civil Rights Movement. I started my project with Mabley because I think she set a high and necessary standard for the power of stand-up comedy as a tool for social change.

Q. Comedy can be risky in how it treats differences. How do comedians go through risky territory and make it work?

A. Comedy is this uniquely audience-dependent form. Is it a joke if no one laughs? Sometimes no laughter is just as communicative as laughter, or the gasp or the boo.

Comedy is also interesting because it creates a conversation between performer and audience, and among audience members. Something is always funnier or more powerful or more memorable when you’re with people.

So what does that burst of laughter do? I think in an anti-racist and feminist context, it proclaims presence. I think it can communicate understanding, shared understanding.

An example of that: I just published an article on Wanda Sykes’ 2009 performance at the White House Correspondents’ Dinner where she looks at Michelle Obama and says, “Thank you so much for unveiling the bust of Sojourner Truth. Do me a favor – will you nail it down real well? Because the next white guy who comes into the house is going to put her in the kitchen.”

We learn a lot from that moment: We learn that amidst a crowd of mostly white elite people, two black women have a moment in which they share a common understanding of what blackness and woman-ness looks like, and a moment of rebellion, because the moment is between the two of them, it’s not for anybody else, at least the way that I read it. Sykes is also, in a prophetic way, saying that progress is not necessarily linear. That moment is a beautiful way for us to confront and complicate the myth of a “post-racist” America.

Q.  Can you provide some insight into your teaching approach?

A. When I teach courses on contemporary performance, I always have a unit on comedy and cultural exchange. Students are very receptive to talking about comedy, first of all, because it is entertaining, and second, because jokes can have a way of distilling complicated rhetoric in ways that are both enjoyable and thought-provoking.

Some of the most intellectually stimulating and intricate conversations I’ve seen in the classroom have come from students responding to and riffing off of comedic material. In the fall of 2017, I’ll be teaching an entire course on comedy and political protest. I’m very much looking forward to that.

As a feminist and queer scholar, my courses are rarely structured on a timeline. Rather than move by time, I want students to make connections across time periods and culture.

For example, in theater history courses, I teach thematically. I’ll teach a unit on theater and the state, where we examine how performance has always informed how and why people relate to their government. Within that unit, we can talk about ancient Greece and how performance was a way that people solidified their relationship to the state – they had these big festivals in the middle of the city – and it’s a way that people understood themselves as Greeks.

We can also talk about the 1990s culture wars when the U.S. government, specifically the National Endowment for the Arts, pulled grants from artists who were performing “morally reprehensible” performance art because of its homosexual content, like the work of Karen Finley and Tim Miller.

Theater and live performance are not on the fringe of cultural development, but at the center, and it’s usually why it is under such fire, why historically, many governments have regulated and shape how art is made and how art is consumed.

Q. What made you want to come to UVA?

A. Of course, I understood UVA as an important academic institution and one that is at the cutting edge of discourse and scholarship in the humanities and the arts. Scholars and artists across Grounds are doing innovative work that serves as a model for my own research. What an inspiring opportunity to be at this place at this particular moment.

Also, my first impression of the students here is that they are incredibly bright and engaged. That was immediately apparent to me during my initial visit here. I’ve been enlivened by the students here and their willingness to ask deep questions, and remain curious throughout the semester.

The crux of my research is that comedy allows us to work through the complex histories and issues in the United States, and I was elated by the opportunity to create courses that help us grapple with America’s past and present. UVA Weekly Episode 6: A New Look at Testing, Behind the Scenes at IM-Rec END_OF_DOCUMENT_TOKEN_TO_BE_REPLACED Inside One of the UVA Labs Studying COVID-19 END_OF_DOCUMENT_TOKEN_TO_BE_REPLACED