What’s Next for the Democratic and Republican Parties? Where do America’s two leading political parties go from here?

How might things change as the presidency and the U.S. Senate shift from Republican to Democratic control?

And how, after the violent events of Jan. 6 at the U.S. Capitol, can we return to even marginally more civil dialogue and bipartisanship?

Those were some of the questions on the virtual table in a Wednesday night panel discussion hosted by the University of Virginia’s Center for Politics. The all-star panel included Jamelle Bouie, a New York Times columnist and UVA alumnus; Chris Krebs, former director of the Cybersecurity and Infrastructure Security Agency in the U.S. Department of Homeland Security and another alumnus; David Ramadan, an executive and international consultant and former member of the Virginia House of Delegates; and Tara Setmayer, a CNN political commentator, ABC News political contributor and former GOP communications director on Capitol Hill. All four are visiting scholars at the Center for Politics, with Krebs as the newest addition.

The event was part of the center’s national, yearlong Civility Project, announced in January as an effort to promote civic engagement and civil dialogue. The hope, Center for Politics Associate Director Ken Stroupe said Wednesday, is to use national, state and local partnerships, events and scholarship to “lower the temperature in politics by focusing on what unites Americans of goodwill, rather than what divides us.”

“Our system is adversarial by design, but the events of Jan. 6 underscore that the partisanship and negative partisanship have reached levels that have already threatened the American republic and may continue to do so unless there are concerted efforts by every American of goodwill to try to change this trajectory,” Stroupe said. “As we kick off this series, we thought it important to look at the state of America’s two political parties and where they might be headed in the future.”

All four panelists’ careers have afforded them an up-close look at America’s often-cantankerous two-party system: Bouie as a journalist, Setmayer as a commentator and former GOP consultant who formally left the Republican Party in 2020 after 27 years, and Ramadan as a Republican elected official and consultant with a reputation for working across the aisle.

Krebs, however, has perhaps the most experience with the personal costs of bitter partisanship. The senior cybersecurity officer responsible for securing the 2020 presidential election, Krebs was appointed to that position by former President Donald Trump in 2018 and then fired by Trump in November after asserting that the election, contrary to Trump’s protests, was in fact secure.

Bringing all of those experiences to the discussion, the four panelists explored everything from the consequences of the filibuster rule in the Senate to the possibility of a three-party system.

Here are some key takeaways from their discussion. You can also watch the full event here.

Both parties are facing identity questions.

On the Republican side, panelists agreed, the key question is what Republicanism looks like now that Trump is no longer in office and the Democratic Party controls both the White House and congressional majorities.

Ramadan and Setmayer both pointed to members of the Republican Party who did not embrace Trump, or who questioned his claims that the 2020 election had been rigged, such as U.S. Rep. Liz Cheney or U.S. Sen. Ben Sasse. However, they also acknowledged that the majority of the party has continued to support Trump. Setmayer cited one recent poll showing that although 25% of Republicans no longer supported the former president, 75% remained confident in him. 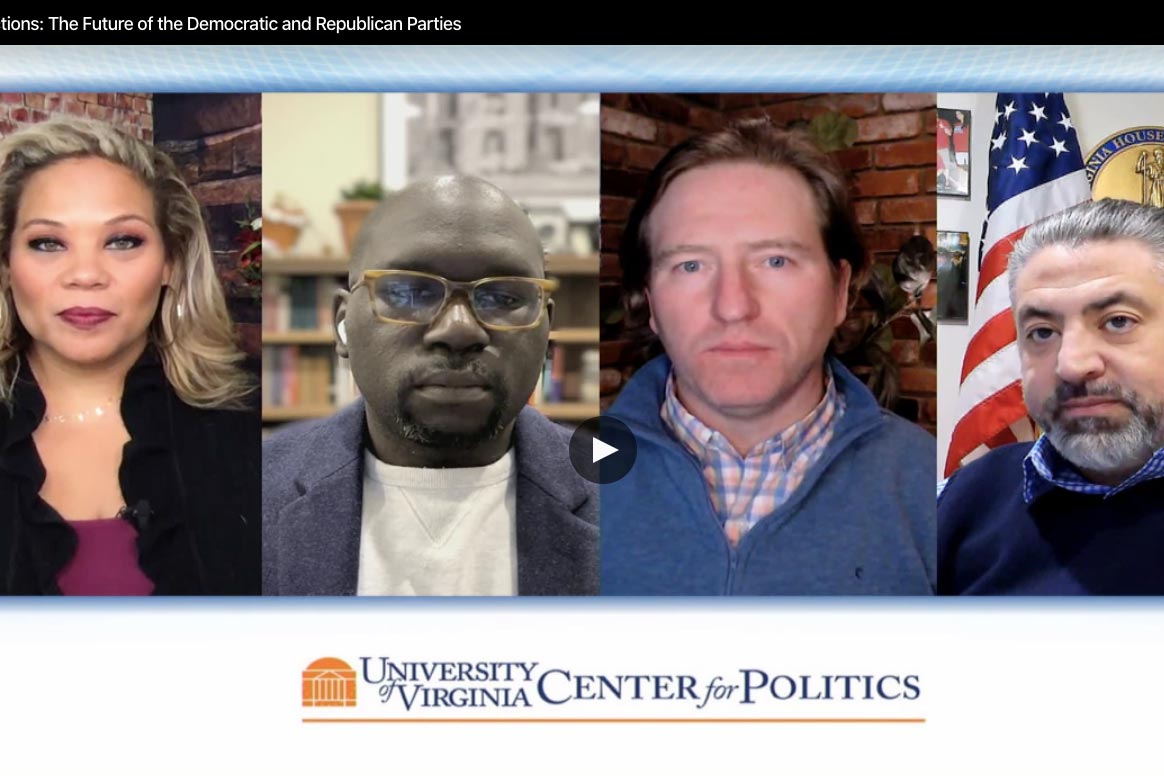 “They are clearly interested in making a run for the White House, and they are not walking away from Trump. If anything, they are trying to find what part of his political persona or style they can use to win votes,” Bouie said. “That, to me, is the clearest indication that, to the extent that there is a ‘civil war’ in the Republican Party, it’s already over. … The direction the party is going is the direction that Trump has forged.”

On the Democratic side, panelists said, there is a divide between the most progressive wing of the party and more centrist elements. Bridging that divide and keeping both groups happy will be a key challenge for President Joe Biden and his administration. Questions about student loan forgiveness offer one current example, as Biden has refused to commit to canceling up to $50,000 in student debt per borrower, but proposed canceling up to $10,000.

“I have a hunch that we will consistently see the Biden White House under-promising and attempting to over-deliver,” Bouie said. “He has voiced support for forgiving $10,000 in student debt, for example, which is not $50,000, but is a big change from the current approach. … That is the dynamic we will see with Biden, pressing against the maximalist version of something, but pushing or endorsing something that is still pretty progressive relative to past Democratic presidents.”

Setmayer warned Biden against catering too much to the progressive wing of his party.

“Joe Biden was not elected to be a progressive president. He ran as a moderate,” she said. “I think progressives trying to put too much in a COVID relief package, or pushing favorite policies so soon, are setting themselves up for failure later, because it is not showing goodwill in areas that have to be addressed first [such as COVID relief].”

National partisanship is trickling down to state and local politics.

Ramadan, himself a veteran of state politics, remained confident that bipartisanship is possible at the state and local level, though he saw some concerning trends.

“We still had real debate in Richmond, to a certain extent,” Ramadan recalled, remembering his friendship with Democratic Gov. Terry McAuliffe. They would often criticize each other harshly, he said, but then reunite over a beer, building a relationship despite their differences.

“But I did see some partisanship carry over from D.C. to Richmond,” said Ramadan, who served in the House of Delegates from 2012 to 2016. “Our local politics were infected, I would say, with national partisanship, and that is a problem.”

Krebs also pointed out concerns about the politicization of the election process at the state and local level.

“I think we need to look carefully at the role of politics in the administration of elections,” he said. “The majority of our secretaries of state who actually administer elections are independently elected; they are politically affiliated. That, in my view, if left unchecked or without appropriate engagement, can lead to less-than-ideal political outcomes.”

One example is currently happening in Georgia, Krebs said, a swing state in the recent election where state lawmakers recently introduced bills that could limit absentee voting, vote by mail and other voter access measures.

“To me, we are going down the wrong track,” Krebs said. “Democracy should be based on access, and it seems to me we are not headed toward more access. We are actually headed the other way.”

Structural obstacles in the Senate could inhibit cooperation.

Panelists spent a chunk of the event talking about gridlock and obstructionism in Congress, particularly in the U.S. Senate.

Krebs noted that power seems to have increasingly coalesced at the top of the House and the Senate, leaving many members with little power and little incentive to cooperate.

“One thing that has struck me over the last several years is the consolidation of political power, particularly in Congress in the leadership ranks, almost disenfranchising rank-and-file members,” he said. “If they can’t actually contribute to the political process, these members turn into more performative politics players” as they speak to the media or rile up constituents.

“That creates a less-than-helpful environment, and allowed a lot of the disinformation and misinformation we have seen over the last several years to go mainstream, particularly on some of the networks,” Krebs said.

Bouie also spoke about the filibuster rule in the Senate, which allows members to delay a vote on a bill until 60 senators vote to the end the debate. Effectively, it means that major legislation often has to have a 60-vote majority, instead of a simple majority of 51 votes.

“I think the biggest obstacle right now to conservative policy being passed into law is the filibuster,” Bouie said. “If you have to have a supermajority to pass legislation, it is not worth your while to try to build 51- or 52-vote coalitions.”

He cited U.S. Sen. Mitt Romney’s ideas about child benefits and ending child poverty as an example. Many Democrats like Romney’s ideas, Bouie said, but they know that he cannot persuade enough Republicans to join him to reach a 60-vote majority.

“If you need 60 votes and Romney can’t bring nine Republicans with him, there is no point,” Bouie said. “But if you only needed 51 votes, there would be some room for [cooperation].”

With questions of identity rising on both sides, it is tempting to consider what would happen if particular wings of the Republican or Democratic parties broke off to form their own party. However, Wednesday’s panelists largely agreed that a three-party system would be very difficult to form or sustain.

“I do not think a three-party structure would work,” Krebs said. If you spend a lot of time in politics or Washington, D.C., he said, “you realize that everything is binary – it is hard to hold three disparate ideas in discourse at the same time. It’s unfortunate, but things break down to yes or no, right or left.”

Structurally, Bouie said, it would be hard for a third party to get candidates on the ballot successfully, and pull enough votes from either Democrats or Republicans to actually win an election.

“We would need major change to the electoral system to have a viable third party,” he said. “There are clear divisions where you could imagine a multi-party system developing, but the rules and the structure we have don’t really provide incentives for the parties to ‘consciously uncouple’ their various coalitions.”