Wendy Conner used to sit in staff meetings desperately trying to keep her legs from twitching. She’d cross her ankles, use pressure to glue her feet to the floor, mostly without success.

When she was finally diagnosed with Huntington’s disease at 52, she learned that the involuntary movements would prove the least of her worries.

“The most difficult thing is dealing with the emotional roller coaster of Huntington’s,” said Conner, now 56, a retired accountant and resident of Gates, North Carolina, who has been a patient at UVA Health’s Huntington’s Clinic since 2017. “Thoughts get magnified and stuck in your head. You’re agitated by them, but can’t get them out. It’s like you need to change the channel, but just can’t.” 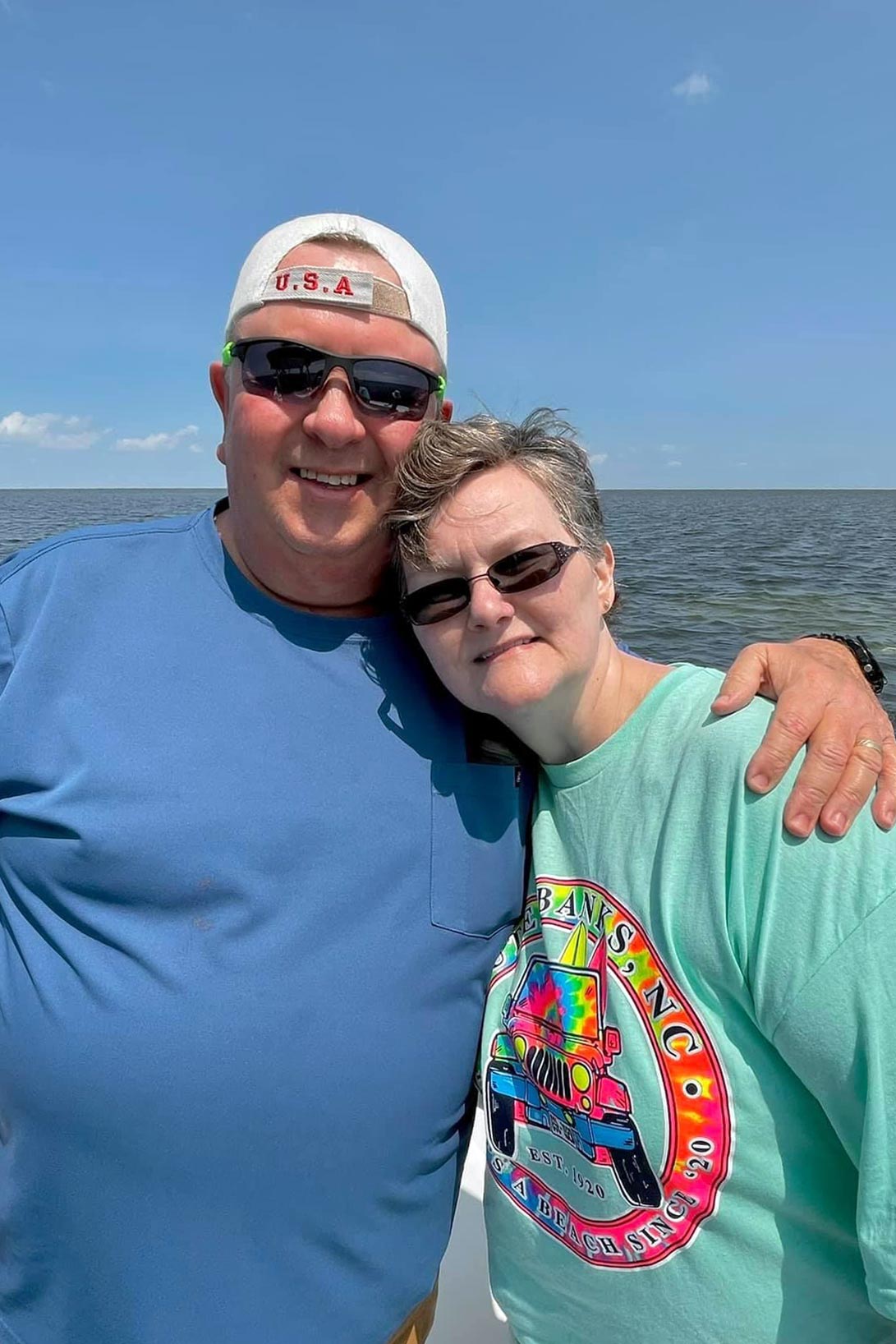 “The personality changes, the anxiety, the cognitive changes,” Gibson, an assistant professor in the School of Nursing, said. “These invisible symptoms caused my patients more distress than the physical ones we could see.”

Gibson originally planned to study Alzheimer’s disease – she’d watched her grandfather’s struggle – but she was intrigued when a physician colleague pointed out the dearth of research on Huntington’s and asked her, “Have you ever met anyone with Huntington’s?” She hadn’t.

Once she began seeing patients in the Huntington’s Clinic, the urgency became clear.

“I saw patients who were often moving a lot in their seat, and weren’t aware of it,” Gibson recalled, “and saw what their family members see, including changes in mood and personality –  the whole picture of all these different symptoms. Hearing stories from my patients and their families, and how few outside the Huntington’s world understood what they were going through, made me passionate about improving their quality of life.”

Huntington’s – sometimes described as a mix of Alzheimer’s, Parkinson’s and amyotrophic lateral sclerosis (Lou Gehrig’s disease) – is a genetic disease that’s distinct because of its onset in prime adult years (generally ages 40 to 50) and its consequent duration of 10 to 25 years.

“People live a long time after diagnosis,” Gibson said. “With Huntington’s, you’re in it for the long haul.”

Are At Risk for Developing the Disorder

Huntington’s disease causes a progressive degeneration of nerve cells in the brain. Patients who inherit it experience physical changes, like chorea (involuntary jerking or writhing), difficulty walking, balancing, swallowing and speaking, as well as less obvious but equally vexing psychological symptoms: personality changes, emotional instability and impaired ability to reason. There is no cure.

Nearly three-quarters of Huntington’s patients report anxiety, and many have depression. And because most live decades beyond diagnosis, unmanaged psychological symptoms often cause the quality of their lives to deteriorate.

Gibson is focused on those mental health symptoms in her work. With support from the National Institutes of Health, UVA’s iTHRIV Scholars Program and a 3Cavaliers grant, which unites UVA scholars across disciplines, Gibson and psychology professor Bethany Teachman will explore these patients’ propensity for “interpretation bias” and test the efficacy of Teachman’s online brain training tool, MindTrails (which Teachman developed in collaboration with Alexandra Werntz Czywczynski, a post-doctoral research associate), that aims to break patterns of negative thinking. Partnering with Gibson and Teachman on the 3Cavaliers award is Dr. Madaline Harrison, a neurology professor and director of UVA’s Huntington’s Disease Clinic, who will aid in recruiting participants for the study.

First, Gibson will test the validity of an interpretation bias scale she developed on 120 patients with Huntington’s disease to see if it accurately captures their negative thinking. Then she’ll select 20 Huntington’s patients to take part in a five-week MindTrails intervention and, afterward, interview them about whether the tool reduced their negative thinking and improved their well-being.

Gibson predicts that the online tool – already shown to reduce anxiety in the general population – will prove especially relevant to Huntington’s patients, given that many can no longer drive (which creates a barrier to in-person therapy) and are interested in non-pharmacologic methods of relief. For Teachman, MindTrails’ potential benefit to Huntington’s patients offers a way to broaden mental health access and support.

“We are always eager to think about how changing negative interpretation biases can help improve emotional health across diverse populations,” Teachman said. “Jessie’s recognition that anxious threat interpretations are highly prevalent, but poorly treated in Huntington’s patients opened an exciting new partnership between nursing and psychology that we hope can increase access to clinical care.”

Conner – who lent crucial perspective in Gibson’s development of the new assessment scale – is eager for the research to begin.

“It’s so hard to get away from that negativity, that automatic feeling that things will be bad,” she said. “This will be great for Huntington’s patients to try, especially because many of us are trying to maintain our well-being. That’s so important.”

What Is the ‘4th Side’? END_OF_DOCUMENT_TOKEN_TO_BE_REPLACED