That is the term astronomers use to describe the first time starlight enters a new telescope or other astronomical instrument. It essentially means “all is well” (though perhaps with a little more tweaking by its designers), and the instrument can begin making meaningful scientific observations.

University of Virginia astronomers achieved that milestone recently at the Las Campanas Observatory in Chile, where their newest astronomical instrument, APOGEE-South, began peering deep into the Milky Way. The success was the result of years of planning, design, construction and testing of the $6 million instrument, most of it conducted at the Department of Astronomy’s Astronomical Infrared Laboratory.

APOGEE-South is the “sister” of a related instrument, also designed and built by UVA astronomers in collaboration with other institutions and vendors, and installed in 2011 at the Apache Point Observatory in New Mexico. The two instruments, working in tandem, now provide astronomers with a complete picture of the full breadth of the Milky Way as seen from both the Northern and Southern hemispheres.

“The APOGEE project, now fully realized, is set to provide astronomers worldwide with important data for years, if not decades to come that will help us gain a better understanding of how our galaxy formed and is evolving,” said Michael Skrutskie, chair of the Department of Astronomy and director and founder of its instrumentation design lab and program. Skrutskie is an expert in the design and construction of infrared cameras and spectrographs and has assembled a team of specialists at UVA that has conceived of and produced multiple state-of-the-art instruments, APOGEE being the most recent. 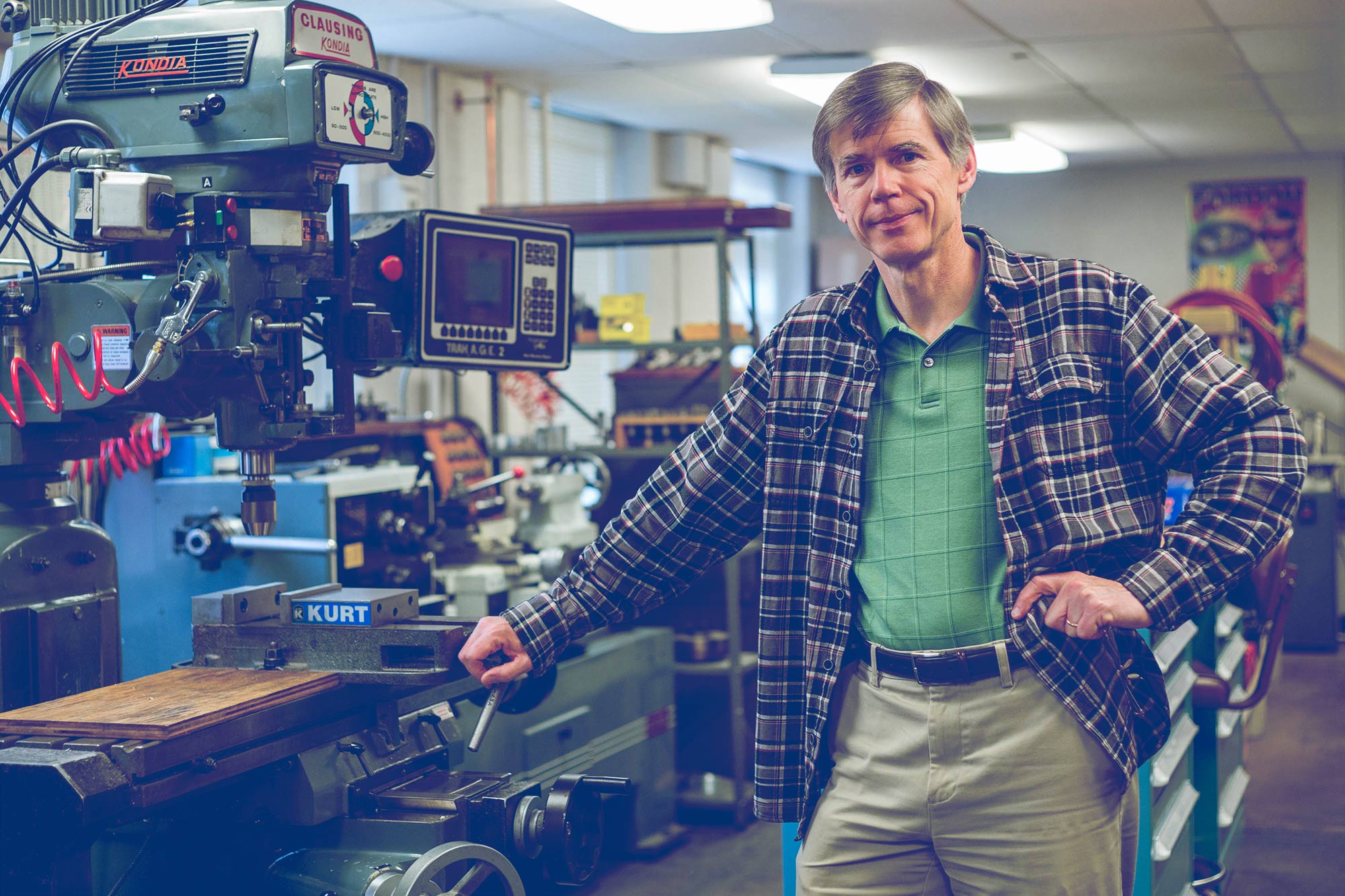 “Because infrared light penetrates the cosmic dust scattered throughout the Milky Way, it reveals heat radiation emitted from stars even on the far side of our galaxy,” he said. “Newly formed planets and forming solar systems also emit abundant infrared radiation, making the infrared a unique gateway for the direct study of planets and the process of their formation around other stars.”

In the case of APOGEE, the instruments allow astronomers to examine the motions and chemical signatures of hundreds of thousands of stars that are too distant and cloaked by dust to be seen at optical wavelengths, even with the most powerful optical telescopes. Data that streams in from both APOGEE instruments is immediately made available to astronomers around the world via the internet. APOGEE-South will operate until at least 2020, providing – as has APOGEE-North – a previously unobtainable data stream and database for researchers to tease out discoveries for perhaps decades to come.

“It’s quite satisfying for our department to play a central role in executing a high-profile project of international importance that is proving so integral to our ability to observe and understand the way the Milky Way is put together, and by implication, how other galaxies formed,” Skrutskie said.

Skrutskie came to UVA in 2001 from the University of Massachusetts at Amherst, where he had established a strong reputation as a leading instrumentalist while working on a major infrared star survey. Then-UVA astronomy department chair Robert Rood recruited Skrutskie to establish and lead a program here – supported by a generous gift from Frank Levinson, a former astronomy graduate student – to build instruments for observatories around the world, and to train students and postdoctoral fellows in the growing field.

Within a short time, Skrutskie recruited a team of instrument scientists and turned the Astronomy Building’s basement into a high-tech facility that since has built instruments used at observatories in Arizona, New Mexico, Virginia and Chile.

One of the big advantages of the instrument design program is that it allows UVA astronomers access to some of the world’s best telescopes, where observing time is a precious commodity – but so is the availability of powerful instrumentation. By providing instrumentation in return for expensive telescope access, UVA astronomers are able to barter their expertise and the instruments they build for time as observers on a variety of telescopes, near and far.

As a result, UVA owns a small share of the world’s largest telescope, the Large Binocular Telescope in Arizona (paid for from a portion of the Levinson gift), and has contributed a mid-infrared camera it delivered in 2009. That instrument, developed by former astronomy graduate student Jarron Leisenring and research scientist Matt Nelson – one of the most-used by the international consortium of astronomers working at the Large Binocular Telescope – has facilitated several discoveries, including recent characterization of planets around nearby stars. Skrutskie is a co-author on a Nature paper to be published soon involving use of this instrument to make direct observations of the infrared glow from volcanoes on Jupiter’s moon, Io.

The University also owns a share interest in the 3.5-meter telescope at Apache Point Observatory in New Mexico, earned with a sophisticated infrared spectrograph known as “TripleSpec.” That device opened the door to the astronomy department’s participation in APOGEE, a major component of the internationally renowned Sloan Digital Sky Survey.

“The instrumentation program builds our astronomy department’s prestige as our faculty make discoveries that, in many cases, would have been difficult without ‘horse-trading’ instruments for observing time,” Skrutskie said.

“Mike [Skrutskie] is one of a select few scientists who is highly successful at both astrophysical research and astronomy instrument-building,” UVA instrument scientist John Wilson said. “The instrument projects that he promotes and initiates, such as APOGEE, are always well-grounded with the goal of investigating specific science questions and developing technologies. He is also extremely committed to education.” 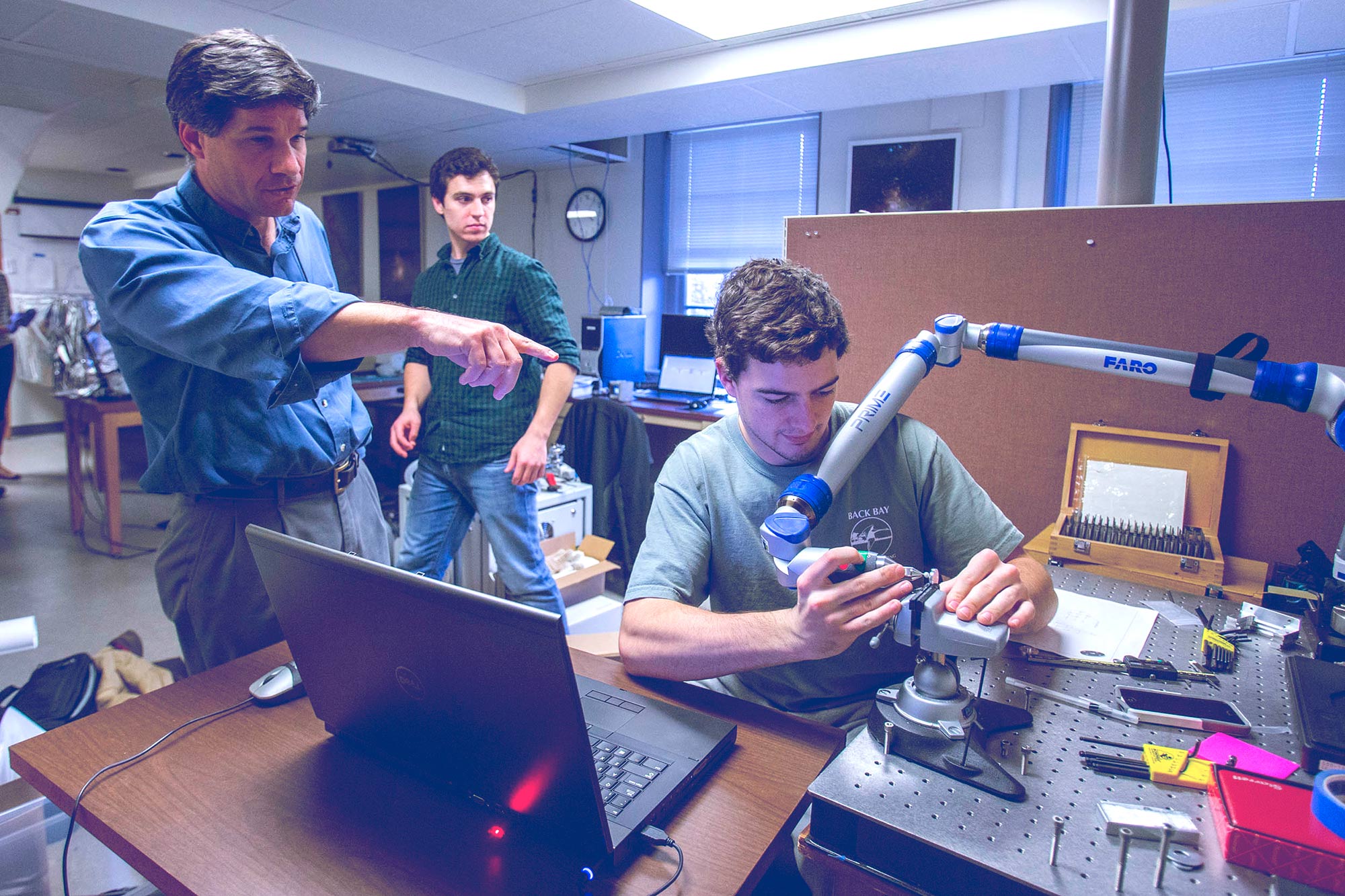 Wilson led the design, construction, assembly and testing of both APOGEE spectrographs, while working closely with UVA professor Steven Majewski, the principal investigator, and research scientists Nelson and Fred Hearty, as well as with Skrutskie.

“Frank Levinson’s gift and support from UVA has enabled us to assemble a dream team of instrumentalists who can imagine and deliver astronomical instrumentation that opens new windows into the universe, and thus enables new discoveries,” Skrutskie said.

The program and lab have helped the department recruit top students who are interested in both astronomy and “hands-on” development of hardware and software for new and existing telescopes. The students become both astronomers and astronomical engineers, and many have gone on to work for NASA, in industry and at observatories and other universities.

One is Ori Fox, an instrument scientist at the Space Telescope Science Institute in Baltimore, which will operate the James Webb Space Telescope after its scheduled October 2018 launch by NASA. The telescope will succeed and surpass the Hubble Space Telescope (obtaining images deeper into the infrared), which has been in orbit since 1990.

“The UVA Astronomical Infrared Laboratory is so important because it allows inexperienced graduate students, like I was, to gain invaluable, hands-on experience by focusing on small- to medium-scale projects and telescopes,” Fox said. “Professor Skrutskie taught us that, ‘If you’re not breaking things, then you’re not learning.’ Let’s just say I learned A LOT in his lab.”

While “learning,” Fox tested and refined state-of-the art infrared sensors that were built by other graduate students in the program and attached to the 31-inch telescope at UVA’s Fan Mountain Observatory south of Charlottesville. This transformed an older and somewhat outdated telescope into a modern machine capable of performing serious astronomical research. Fox then used the instrument and the telescope to observe cosmic explosions, called supernovae.

“My experience in the lab paved the way for my future career,” he said. After earning his Ph.D. from UVA in 2010, Fox went to work at NASA, where he tested infrared sensors for the James Webb Space Telescope, which led to his current position.

With the completion of the APOGEE project, Skrutskie now intends to continue his focus on adding infrared capability to smaller telescopes, this time focusing on suspending small telescopes and infrared instruments from NASA high-altitude balloons and building small experiments that can be launched by NASA into orbit via a new technology called “CubeSats” – satellites smaller than a breadbox that can be deployed along with larger orbital deliveries. Both approaches require lightweight, small instruments that are naturally on a scale accessible to students from design to flight.

“Sometimes we accomplish more on smaller telescopes that we effectively own 24/7 because we have substantially more observing time than might be available on a much larger telescope,” Skrutskie said. “And I love the opportunity it provides for students, particularly undergraduates, to design and fabricate, from start to finish, instruments that they can use to study the sky.”

APOGEE Peers Into the Milky Way

The Milky Way is a “prototypical” spiral galaxy, perhaps like countless billions of others, and therefore serves as a model with which to help explain how the universe is constructed and evolving. Using data from APOGEE and other instruments, astronomers are piecing together insights into how essential ingredients, hydrogen and helium, originating from the Big Bang, transformed through nuclear fusion into more complex elements – carbon, nitrogen, silicon, iron – producing the elements fundamental to planet formation, and ultimately life.

Each APOGEE instrument uses a system of fiber-optic cables to simultaneously channel light collected from 300 stars, and then spreads each star’s light into an infrared rainbow with a specialized prism-like optic. A 265-pound camera, featuring six lenses with sizes up to 16 inches in diameter, and highly specialized infrared light sensors, record the rainbows as input to computers that calculate the chemical signatures of each targeted star and its velocity in relation to other stars.

The APOGEE spectrograph is a technically advanced instrument, cryogenically cooled and housed under vacuum within a two-ton steel vessel. It allows astronomers to derive the precise motions of stars and measure the abundances of 15 chemical elements, including carbon, nitrogen and oxygen, the building blocks of life. APOGEE-North has even helped astronomers identify Milky Way stars with planetary systems. In conjunction with the new instrument in the Southern Hemisphere, many more such systems are likely to be uncovered.

APOGEE is part of a large, international collaboration featuring hundreds of scientists at dozens of institutions around the world, including seven Chilean universities tasked with operating the southern instrument, sharing time, knowledge and expertise, and exchanging students. UVA professor Steven Majewski, who leads the project, traveled to Chile numerous times in recent years to establish the collaborations.

APOGEE is part of a major astronomical project known as the Sloan Digital Sky Survey, which specializes in applying innovative observatory techniques and instruments to sample the components of the universe. The Alfred P. Sloan Foundation funds that survey, along with contributions from dozens of research institutions, including UVA and the U.S. Department of Energy. The survey is operated by the Astrophysical Research Consortium.

What Is the ‘4th Side’? END_OF_DOCUMENT_TOKEN_TO_BE_REPLACED