This Student Is a DJ at UVA’s Radio Station. You Can Do It, Too. Kyle Chattleton had no radio experience when he walked into the offices of WTJU 91.1 FM, the University of Virginia community’s radio station, in the winter of 2013.

At the time, the California native was living in an apartment off of Rugby Road, and his walks and jogs took him past WTJU’s former studios in the Lambeth Field Apartments.

As it turns out, the Ph.D. student (in critical and comparative studies in music) was looking for a new hobby, while WTJU was, and is, always looking for new hosts.

Chattleton wanted to host a show featuring his favorite genre: contemporary classical music. “So I sent in my application,” he said, “and I think it was a couple weeks later that I got a response back, and I think I was on the air within about a month or two after that.”

Chattleton said almost everyone arrives at WTJU with no prior radio experience. “That’s another cool thing about WTJU,” he said enthusiastically. If you have a love of music and want to share that with other people, all you have to do is submit an application. “The rest is up to us. We will show you how to use all the equipment. We will show you how to put together your program and what to write,” he said.

WTJU features four musical genres: classical, folk, rock and jazz. The station is currently in the midst of this year’s jazz fundraising marathon (the classical marathon will be in December, with folk in February and rock in April).

Chattleton has worn many hats in his seven years at WTJU and today hosts the contemporary classical music program “A New Sound,” alternating shows with cohost Brian Simalchik.

Chattleton said another favorite thing about WTJU is how seriously it takes its mission as a community radio station. “I cannot tell you how much I’ve enjoyed my interactions with the listeners,” he said.

The now-veteran DJ recalled a particularly moving exchange he had with a listener who called to talk about the music Chattleton chose to play after the horrific 2016 Pulse nightclub mass shooting, which left 49 people in the gay social club dead.

He played a requiem. “I also programmed George Crumb’s ‘Black Angels,’ which is a lament of what the composer thought was the desolation of the Vietnam War,” he said. “The music, I felt like it was speaking to the present moment.”

During the program, the studio’s listener line ran. The caller “just started breaking down into tears immediately and just said, ‘Hey, this is exactly what I needed in this moment.’”

WTJU was founded 63 years ago as a student-run radio station and has welcomed hundreds of volunteers over the years, many of them members of the community.

Today, UVA students have not one, but two volunteer radio opportunities. They can apply year-round to WTJU, or to the newer, completely student-run station WXTJ 100.1 FM, which recruits station workers at the beginning of each semester.

Nathan Moore, the general manager of WTJU and a staff adviser to WXTJ, said the programming at the latter station is “pretty much free-form.”

“The students will play a bunch of indie stuff, hip-hop or electronica,” he said. “A couple of years ago, some of the WXTJ DJs were perusing WTJU’s vinyl collection, and playing traditional Swiss folk tunes. 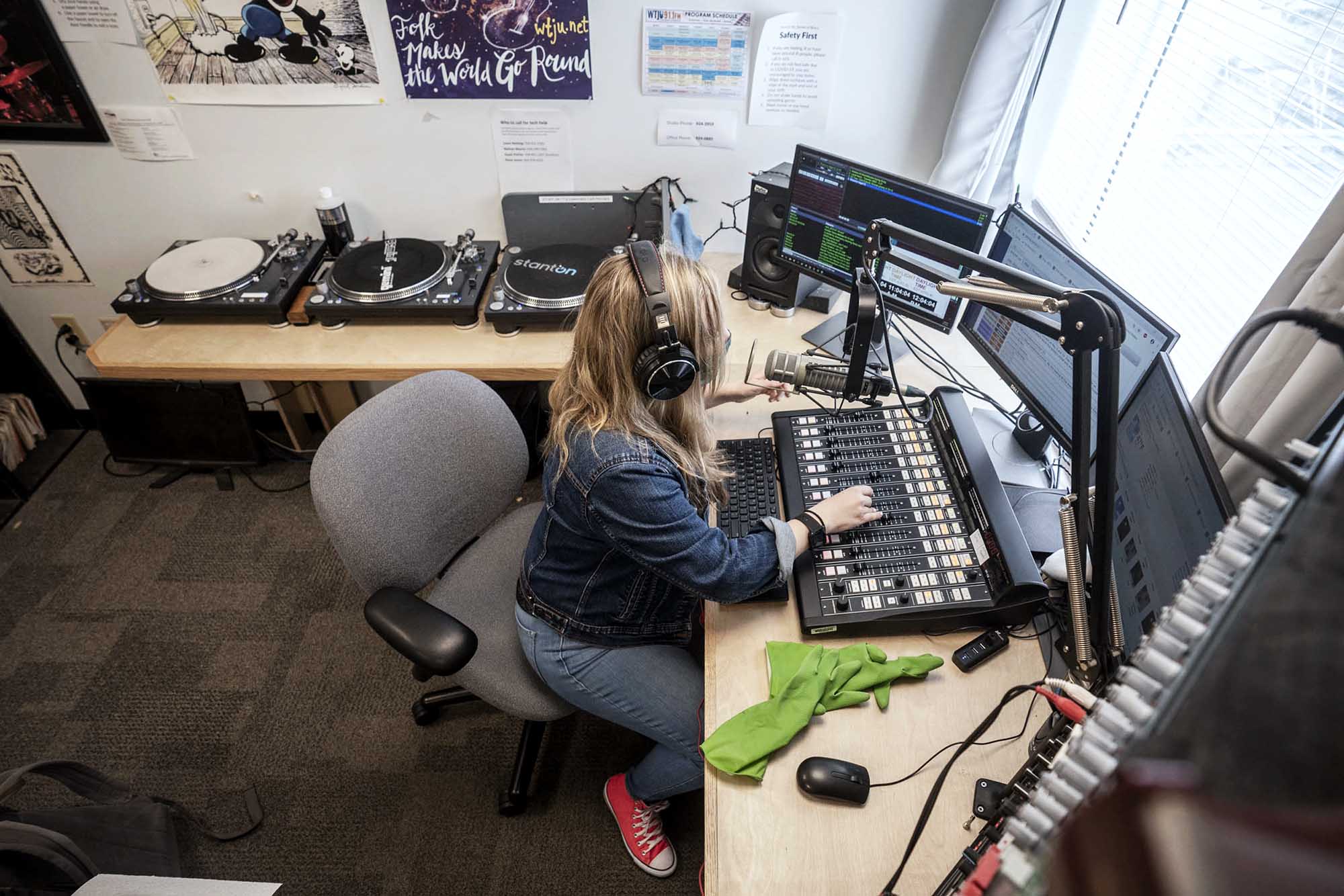 “If students have an interest in any of the genres played on WTJU – which is most genres, really, except for the poppy stuff – you can apply to be a DJ” through the volunteer link on the website, Moore said.

Since COVID-19 began forcing physical distancing in March, many DJs have been broadcasting from home studios. But Moore said students can also come into WTJU’s new location on Ivy Road for in-person tutorials and broadcasting. The station has strict protocols that require DJs to wipe down all surfaces before and after their hosting duties. There are also Plexiglas shields to separate people, and HEPA filters continually clean the air.

And there’s this: “The studios are big enough to have the host plus one guest who will be able to maintain six or eight feet of distance,” Moore said.

Ahead of Thanksgiving, Hoos Look Back With Gratitude END_OF_DOCUMENT_TOKEN_TO_BE_REPLACED

The Cavalier Marching Band Marches On – Even When Apart END_OF_DOCUMENT_TOKEN_TO_BE_REPLACED