Andrew Friedman, his son recalls, was the life of the party, the “linchpin” in the many social circles that spun around him, a man who built close friendships at every stage of life – from his home in Long Island, New York, to his college days at George Washington University, to his work in New York City – and kept up those friendships to form a big, vibrant community.

“People gravitated to him, and together with our mom, he taught us what it means to give back, to pay it forward, enjoy every day to the fullest and make the most out of life,” said Dan Friedman, a 2019 graduate of the University of Virginia’s Darden School of Business. “He was the best dad – our rock, our mentor, our coach.”

When Andrew perished at the World Trade Center in the Sept. 11, 2001 terrorist attacks, the big, vibrant community he created showed up for his family – his wife, Lisa, and their 11-year-old twin boys, Dan and Mike. Police had to direct traffic for miles around the Long Island synagogue where Andrew’s memorial service was held, as thousands came to mourn and support his family. 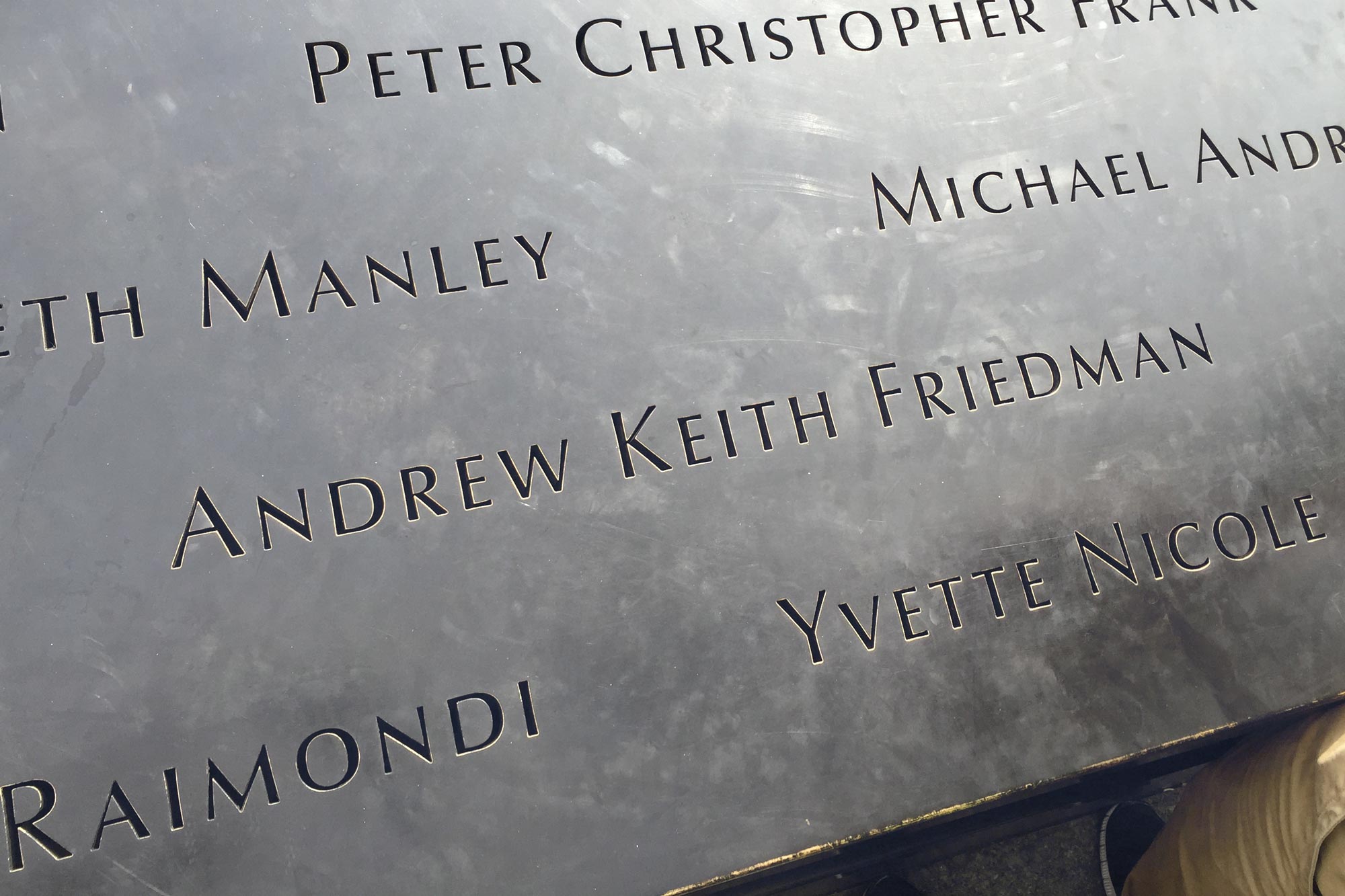 Although the days between the attacks and that memorial service are a blur, a few things still stand out to Dan Friedman. He remembers giving his father’s eulogy, a boy standing before that huge crowd. It was, he said, “one of the hardest things I have ever done.”

He also remembers vividly the day of the attacks. Both father and sons were in new environments. Andrew Friedman had just started a new job two weeks earlier at Carr Futures, a brokerage firm with offices on the 92nd floor of the north tower of the World Trade Center. Dan and Mike had just started their second week of middle school, navigating a new school building and environment.

“Around second period, there was a knock on the door and the principal asked to see me outside. No one really knew what was going on. He told me that a plane had hit my dad’s building, but that he was fine,” Friedman said. “I kind of went about my day, we really didn’t have much exposure to the news. Toward the end of the day, I got called into the office and my friend’s mom is waiting for me, to pick me up for a playdate. I did not think much of it at the time, but I know now that my mom was trying to distract me, to keep me away from the house while she figured things out.”

Andrew Friedman never made it out of the north tower that day. American Airlines Flight 11 struck floors 93 through 98; while the 92nd floor, where he was, remained intact, the impact destroyed elevators and stairwells, making escape impossible. Carr Futures lost 69 employees in the attack. The days that followed run together, Dan said, as the family tried to determine what had happened to Andrew. However, another memory stands out. A grief counselor advised Lisa to let the boys join the healing and repair work going on in their city. So, on Friday, Sept. 14, she took the twins to various fire stations and hospitals, where they handed out supplies, including clean, dry socks, to first responders dealing with the aftermath of the attacks.

Helping those who were saving lives and putting the city back together eased his pain a bit, Dan said, and the feeling stuck with him for a long time. In fact, that day – and the socks they handed out – inspired the company that Dan now runs with his brother and mother, Tall Order.

Launched in 2017, Tall Order was born out of the brothers’ desire to give back to those who had given so much to them – a “tall order,” if you will – and their undeniable need for socks that fit. Like their 6-foot-5 father, both Dan and Mike Friedman are tall men, 6-foot-9 and 6-foot-11, respectively. Finding fun, colorful and comfortable socks proved a problem – until it sparked an idea.

“After a few years in corporate America, both of us were really getting frustrated by not being able to give back as much as we wanted. We always knew in the back of our minds that we had to do something to pay back those who helped us during our toughest time,” Dan Friedman said. “We knew we wanted to start some sort of company to help give back, but the idea for the actual product didn’t come until we saw all of our friends personalizing their outfits with fun socks that we could never find at big-and-tall stores. It reminded us of handing out socks to the first responders that day, and an idea was born.”

Now, Tall Order sells a wide variety of socks for men, sizes 9-20. Ten percent of the company’s earnings go to nonprofits that help grieving families, including Tuesday’s Children, a nonprofit formed in 2001to assist kids who lost parents in the attacks. The organization helped children access grief counseling and ran various programs for them in the years after 9/11. 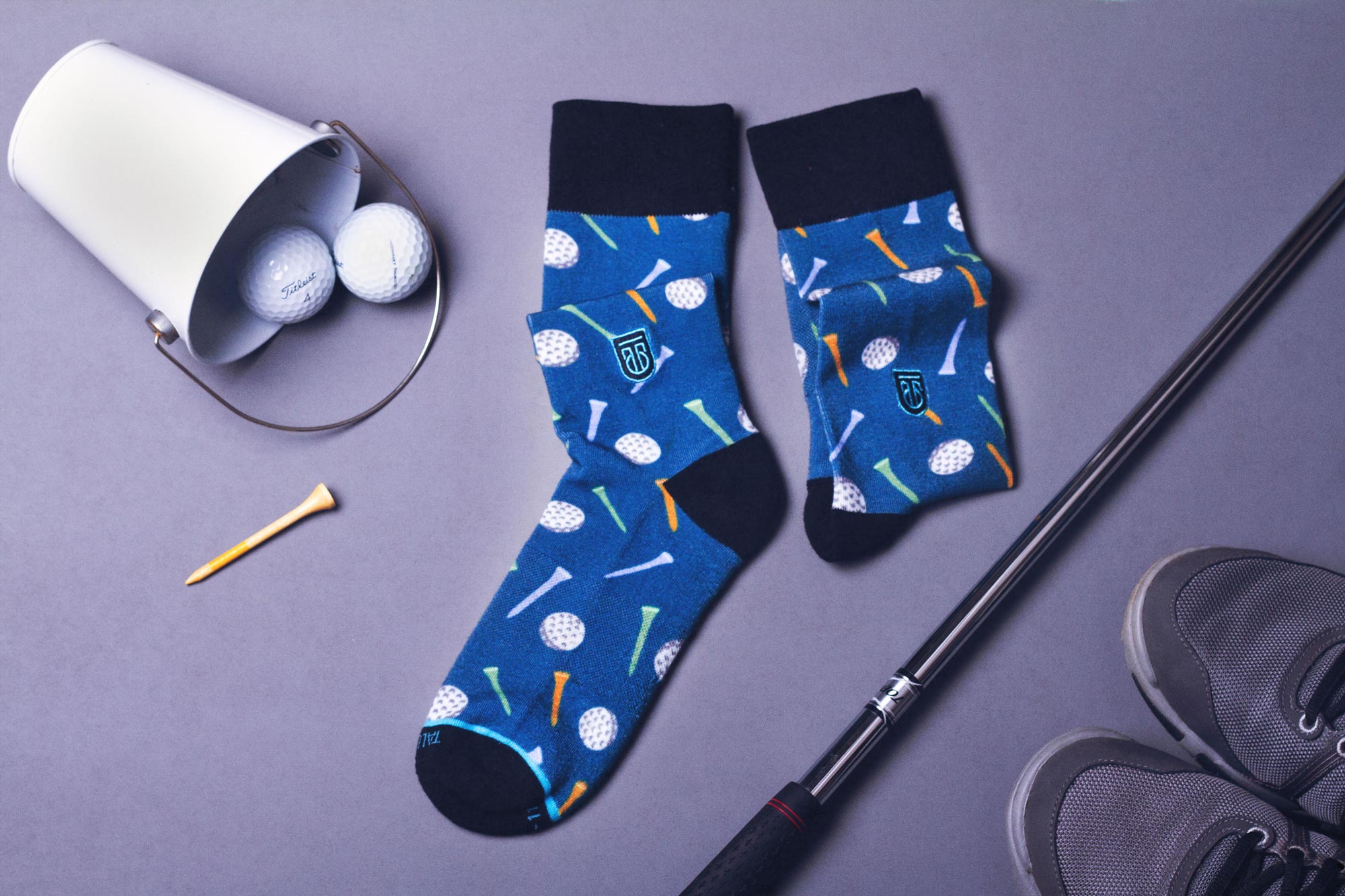 Once, Dan recalls, Tuesday’s Children sponsored a take-your-child-to-work day, something that children who lost parents on 9/11 might otherwise miss out on. A volunteer took Mike Friedman to the New York Stock Exchange for a day, while Dan went to his community’s local CBS affiliate, watching and learning how the news was made.

In the 20 years since the attacks, Tuesday’s Children has expanded its mission to help other communities coping with trauma, including military families and families impacted by shootings and other tragedies.

Another organization that Tall Order supports, the FealGood Foundation, assists first responders who were left with significant medical issues after responding to the terrorist attacks, including cancer, lung disease and heart disease. Construction supervisor John Feal started the organization after he was injured while overseeing demolition at Ground Zero.

Over the past year, Feal and others have faced a new challenge: COVID-19. Many 9/11 first responders are more vulnerable to COVID-19 because of the lung damage they sustained 20 years ago. Feal himself contracted the virus and has since recovered. 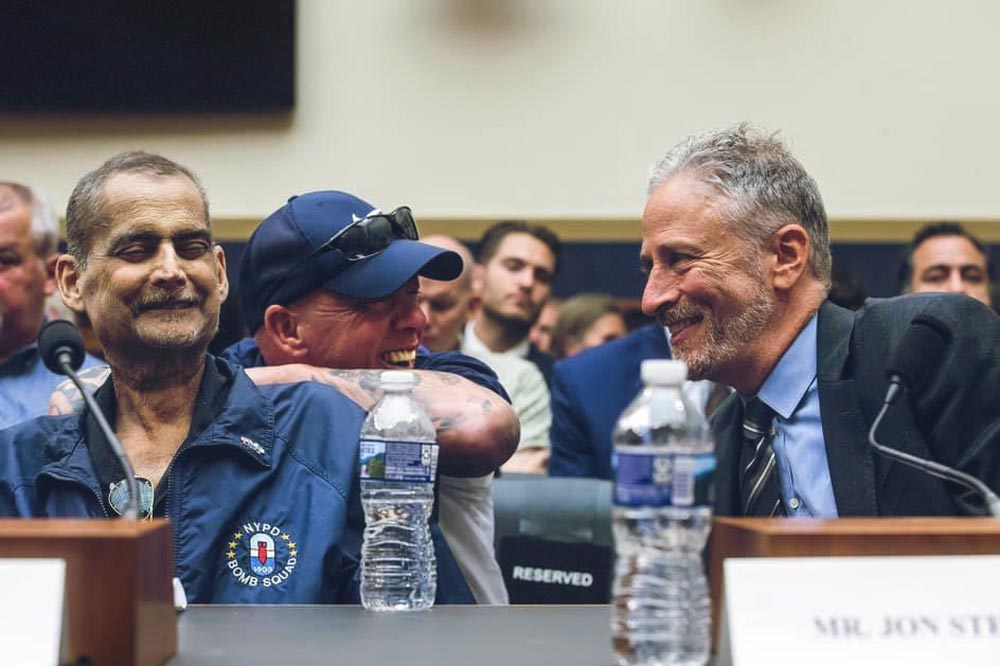 “We are so proud to support them,” Dan Friedman said.

Tall Order led Friedman to Darden. The family decided that Mike and Lisa would continue to work on the business full-time while Dan pursued an MBA that could help the family keep building the company.

“I learned a lot at Darden, from soft leadership skills such as managing a team, communication and networking to specific subject matter, especially finance, operations, branding and marketing,” Dan Friedman said. “I use the tactical leadership skills I learned at Darden daily.”

He especially liked the case method, used in Darden classes to help students work through real-world business examples and find solutions. “It gave me a different way to approach a problem,” he said. 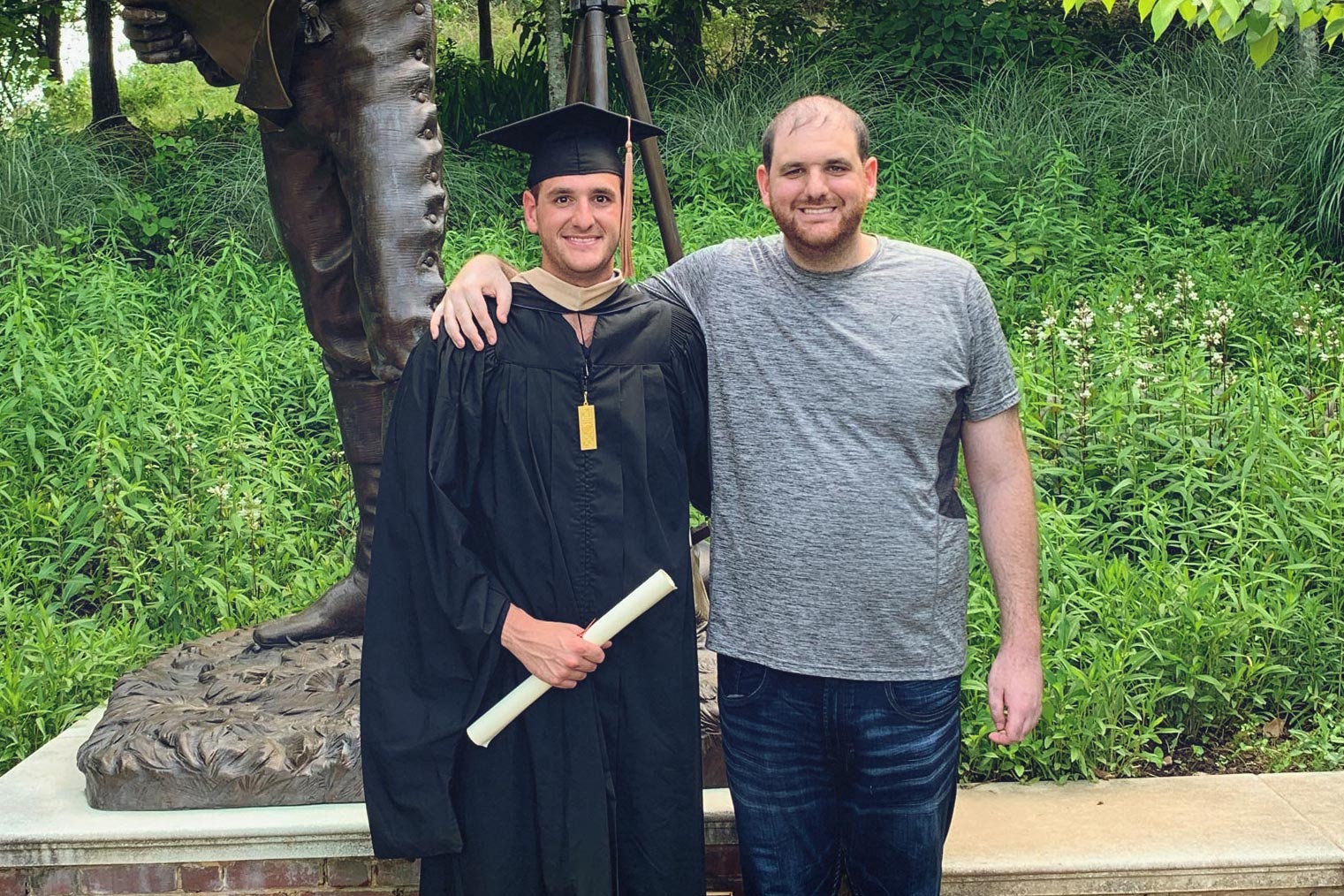 Those problem-solving skills got a workout this year, as the COVID-19 pandemic temporarily closed many of the markets and pop-up shops Tall Order relies on for sales.

“We had a great year in 2019, and our plan for 2020 was to scale into retail, which of course changed during COVID,” Dan Friedman said. “We are also very focused on dress socks that people wear to the office or to weddings, which was another big change.”

Dan, Mike, Lisa and their team shifted gears, building up their casual and athletic product lines, and beginning work on a line of underwear and t-shirts. They continued sales on their website and, thanks to widespread COVID-19 vaccinations, now have a full travel schedule of markets and pop-up shops for the fall and winter.

“We are really excited to get on the road again,” Dan Friedman said.

Looking at what they have built, he said it is hard to believe it has been 20 years since they lost such a giant figure in their lives.

“It still feels like yesterday, to be honest,” he said. What happened that day has shaped much of Friedman’s life in some way, from having to overcome fears of getting on a plane to knowing that he wanted to come back to New York eventually, even though it is sometimes painful to be so near Ground Zero.

“I’m a New Yorker,” he said. “I love this city. As tough as it has been, as tough as it still is to see the memorial, I still love NYC. I could not be prouder to be from here.”

Friedman believes his father would be very proud of his wife and sons. Lisa has remarried, to a man named Bruce Clark, with whom Dan and Mike have a great relationship. “He treats my mom so well, and he has helped our family a lot,” Friedman said.

Mother and sons work together daily at Tall Order, and they love being able to give back, knowing it’s what Andrew would have wanted.

“I think my dad would be so proud that we are still so close as a family, not only in business, but in life,” Dan said. “We are holding onto his values, giving back, paying it forward and living every day to the fullest. We stay in touch with his friends, and I think he would just be so happy about what we are doing and the people we have become.” With the Pentagon Burning, He Thought, ‘This Is the Magnitude of Pearl Harbor’