Pipelines Are Controversial Now, But One of the First Big Ones Helped Win World War II Editor’s Note: W. Bernard Carlson, professor of humanities and chair of the Department of Engineering and Society at the University of Virginia, wrote this piece for The Conversation. Carlson is a historian of technology who studies the careers of inventors and entrepreneurs to educate future engineering leaders.

il and gas pipelines have become flashpoints in discussions of climate change. From the Atlantic coast to the Dakotas, pipelines that would deliver fossil fuels to customers have sparked protests and legal challenges. The Keystone XL pipeline, which was designed to carry oil from Canada’s Alberta tar sands to refineries on the U.S. Gulf Coast, roiled U.S.-Canadian relations for a decade before it was finally canceled in 2021.

Amid these debates, it’s easy to forget how heavily the U.S. economy relies on existing energy pipelines. In 2020, some 84,000 miles of long-distance pipelines carried crude oil, while another 64,000 miles of pipe moved refined products, including gasoline and jet fuel.

These systems typically draw attention only when they leak or are damaged. For example, in May 2021 the Colonial Pipeline made headlines when a cyberattack shut it down, interrupting gasoline supplies along the East Coast.

Ironically, this network originated as the solution to a pressing energy problem and was initiated over objections from the oil industry. In 1942, Germany’s U-boats brought World War II to the U.S. Atlantic and Gulf coasts, sinking dozens of merchant ships, including oil tankers. That damage spurred construction of the first large U.S. pipelines, which fueled the Allied war effort.

Petroleum currently supplies about one-third of U.S. energy consumption. Much of it is delivered by pipeline. It would take at least 750 tanker trucks per day, loading up and moving out every two minutes, working 24 hours a day, seven days a week, to carry as much oil as even a modest pipeline.

In the 1800s, much U.S.-produced oil came from wells in Pennsylvania and Ohio. However, when prospectors struck oil in Spindletop, Texas, in 1901, the industry shifted to the Lone Star State.

These fields produced much of the gasoline that fueled the automobile revolution, using narrow-bore pipes to move crude over distances of a few miles from wells to refineries or railroads. To get oil to big refineries in the Northeast, Texas companies relied on tankers that sailed through the Gulf of Mexico and up the Atlantic coast. By the late 1930s these ships transported 95% of American petroleum products. 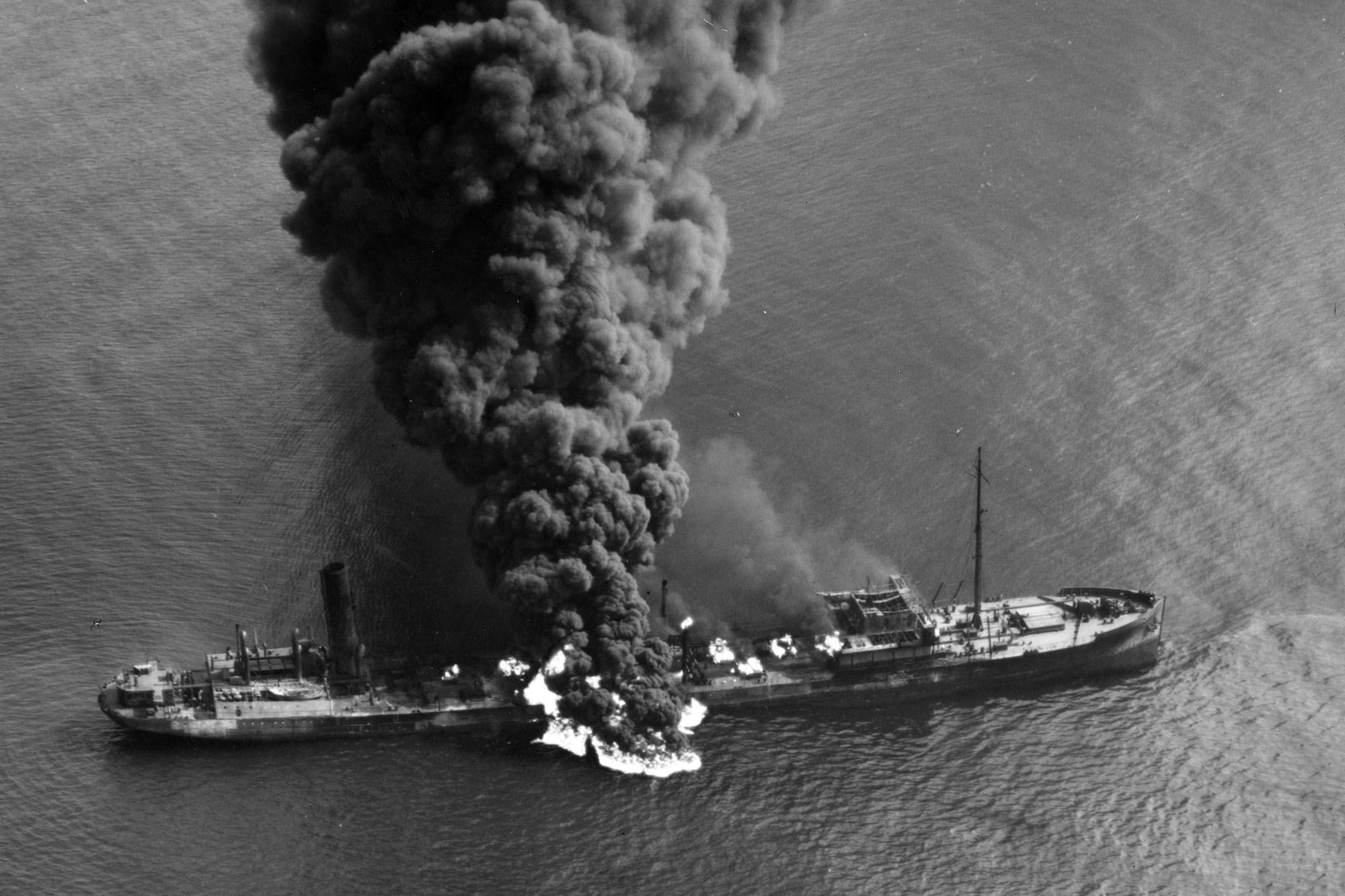 To avoid the U-boats, oil companies tried moving crude by rail and barge. This limited delivery to 140,000 barrels a day, less than half of the 300,000 barrels needed to meet wartime demand at East coast refineries.

In the spring of 1942, Interior Secretary Harold Ickes proposed constructing a large-diameter war emergency pipeline. The oil industry balked: It cost 16 cents a barrel to send oil by sea from Texas to New York, and executives argued that building pipelines would double the cost. When industrial and military needs for petroleum grew desperate, the companies relented, partnering with the government to build the new pipeline.

Construction began in June 1942. Government officials chose an inland route, avoiding coastal states that might be vulnerable to enemy air attacks. The Big Inch was constructed in two sections: one north from Texas to Illinois and another from Indiana eastward. A second, 20-inch-diameter line, the “Little Big Inch,” was added in 1943.

These became the world’s longest pipelines, snaking across 1,340 miles (2,150 kilometers). The US$146 million project was one of the most expensive initiatives underwritten by the federal government during World War II.

Oil began flowing in August 1943. Over the next two years, these two lines delivered 300,000 gallons of oil per day to refineries in New Jersey and Philadelphia, which was then shipped overseas. The U.S. ultimately supplied 6 billion of the 7 billion barrels of oil used by Allied forces during the war. In 1945, Ickes called the Big Inch one of the country’s “most potent weapons of war.”

The Big Inch was featured in newsreel shorts with titles such as “Pipe Dream Comes True – Oil!” and “Oil is Blood.” But although it demonstrated that large volumes of oil could be moved cross-country, it didn’t capture the public imagination like the atomic bomb, radar or penicillin.

In 1947 the federal government sold the pipeline to the Texas Eastern Transmission Corporation. It still carries natural gas from Texas to the Northeast.

Long-distance pipeline construction accelerated in the 1950s and 1960s as the technology improved and oil demand grew. More than half the existing U.S. fuel pipeline network was built before 1970.

Climate Change, the Next Target

Today the enemy is climate change, and pipelines are in the crosshairs as part of the fossil fuel production and delivery system. Pipeline projects also are more controversial because they now are subject to environmental impact assessments. These reviews analyze how building the pipelines could affect local water supplies, wildlife, nearby historic sites nearby and other facets of the communities they pass through.

Debate over the Keystone XL pipeline shows how the framework for considering pipeline projects has expanded. Opposition to the $8 billion, 1,200-mile pipeline focused on safety concerns, its route across Indigenous lands, destruction of boreal forest and the large carbon footprint of oil from tar sands.

The latest controversial project is the Enbridge Pipeline 3 replacement, which would replace 337 miles of an existing pipeline running through Minnesota. Opponents argue that the project, which would double the old line’s capacity to carry tar sands oil from Alberta to the U.S., threatens Minnesota wetlands, violates the treaty rights of Indigenous people in its path and will help perpetuate tar sand extraction.

The Big Inch and its successors were 20th-century technological accomplishments, but addressing climate change means turning America’s engineering talents to equally ambitious renewable energy projects. As a historian of technology, I look forward to seeing new solutions emerge. What equivalents of the Big Inch will help win the war against climate change?

What Is the ‘4th Side’? END_OF_DOCUMENT_TOKEN_TO_BE_REPLACED