The statistics vary from year to year, but a failure rate of 60% for candidates is not unusual at the U.S. Army’s Ranger School.

Second Lieutenant Sam Martino, a former University of Virginia wrestler, is among the soldiers who passed the grueling 62-day course and earned a Ranger tab this summer.

“I don’t pretend to know how hard it was, but just some of the things I’ve heard and read, it’s crazy what they go through,” UVA head wrestling coach Steve Garland said. “What that young man was able to endure and persevere through, that’s just incredible to me.”

Martino, who attended the University on an Army ROTC scholarship, graduated with a bachelor’s degree in economics in 2020. He graduated from Ranger School on Aug. 27 in a ceremony at Fort Benning, Georgia.

His father, Chuck Martino, who retired from the Army as a lieutenant colonel in 2008, graduated from Ranger School in 1991.

“And then 2021 comes around and it’s my turn, which is pretty cool,” Martino said on a recent Zoom call.

The first week of Ranger School consists of the Ranger Assessment Phase, which tests students’ physical fitness, endurance and some basic field skills. “That basically weeds out about half the people,” Martino said.

Then comes the Darby Phase, also held in the Fort Benning area. That lasts 20 days, Martino said, and students who pass it advance to the Mountain Phase at Camp Merrill in Dahlonega, Georgia. For those who pass the first two parts, Ranger School concludes with the Swamp Phase at Camp Rudder on Florida’s panhandle.

The lessons he learned as a UVA wrestler, Martino said, helped him clear the myriad obstacles he encountered in Ranger School.

“Absolutely,” he said. “I don’t think there is a better way to set yourself up for success in the Army, or whatever you want to do, than wrestling.”

Under the tutelage of Garland and his assistant coaches, twins Trent and Travis Paulson, Martino said, he learned how to “work hard and smart. That kind of went into my train up for Ranger School, both physically and mentally. I was studying the different doctrine and tactics and approaching it similarly to how I would have wrestling. I’m not going to just show up one day at a tournament and be good at [techniques without practicing them]. You’ve got to work at it, it takes time, and it’s the same approach I take here.

“But as far as the mental game goes, I think that’s where I had my greatest separation with the people who make it in Ranger School and the people who don’t make it in Ranger School. And that comes straight down to growing up in a program like UVA with Garland and getting pushed to your limits every day, in that [wrestling] room or on the track or in the weight room.” 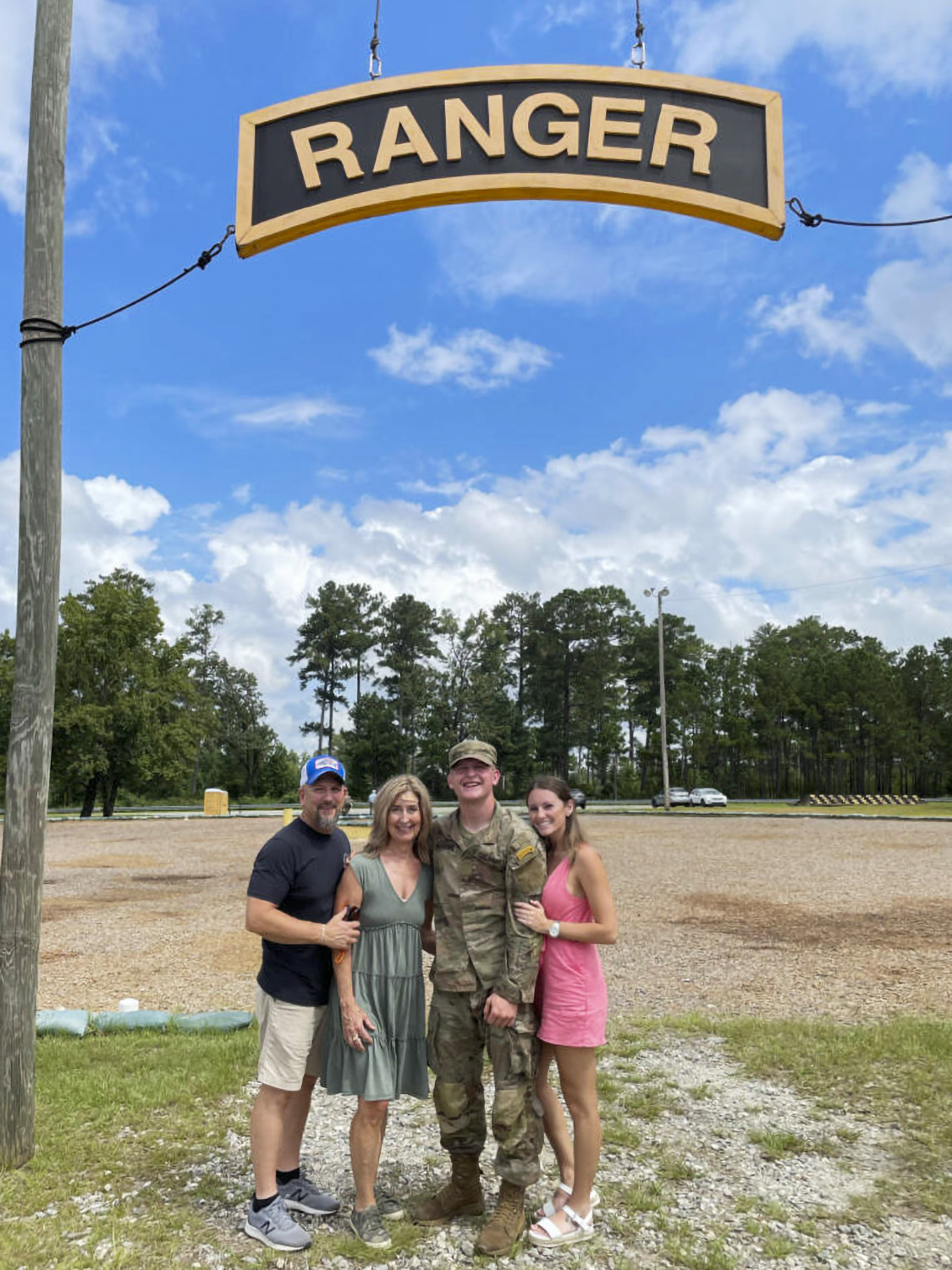 Martino weighed around 180 pounds when he started Ranger School. By the end, he was about 20 pounds lighter.

“One of the unique things about Ranger School is, and why you need so much recovery afterwards, is they restrict two things the most,” Martino said. “They restrict calories and they restrict sleep.”

If Martino came close to breaking during Ranger School, it was near the halfway point, he said.

“You’re in Mountains [Phase] in Dahlonega, Georgia. A good night’s sleep is, like, two hours. If you get two hours of sleep, you’re winning. A lot of times it would be more like half an hour, and then you have to move around. You might get another half hour here or there.

“I’d say in Mountains, everybody has a gut check somewhere. Mine just happened when we were weapons squad one day. You rotate squads. Weapons squad kind of stinks, because you’re carrying the 240, which is a machine gun, as well as all the equipment that comes with it. So your rucksack, your big backpack, is going to be heavier than normal that day, or however many days you have it. You can expect to have that rock on your back, I’d say, 19 to 20 hours out of the day, so you have that extra 80 to 100 pounds on your back, and you’re not happy about it.

“I just remember going up this mountain. I don’t know if you’ve ever been to Dahlonega, Georgia, but at points it’s honestly like Humpback [Rock] with how steep it is. So you’re on your hands and knees crawling up this mountain, and you’re like, ‘Will I ever get to the top of this thing?’ That day we were weapons squad and I was crawling up this hill, and I was like, ‘Am I going to make this? I don’t know.’ And, of course, it’s the middle of July in Georgia. They call it ‘seeing the wizard’ when you’re about to pass out because it’s so hot. You don’t want to see the wizard and you don’t want to become a heat casualty, and I was just sweating so much.”

He laughed. “That’s another thing that wrestling prepared me for: I know how to lose some weight, I know how to sweat. But it was so hot that I was just like, ‘I don’t know if I’m gonna make it.’ I just kept reminding myself, ‘Tomorrow I’m going to quit. Not today. Tomorrow I’ll quit.’ And then it gets a little easier as days go on, and then you’re just like, ‘Hey, I’m already here and it’s day 50 out of 60. I can do this.’”

Martino, who’s from Colonial Heights, about 25 miles south of Richmond, attended high school at McDonogh School, a boarding school in the Baltimore area.

Military service is a tradition in Martino’s family – his brothers, David and Mark, are Army captains. He wasn’t sure at first, though, if he would stay in the ROTC program.

“It had always been my dream to wrestle at a D-I school, especially a school like UVA,” Martino said. “I was really focused on that, so I didn’t really want to give [ROTC] a chance. Eventually I did give it a chance, and when I really looked into the opportunities, I’d say it was my second year, I realized, ‘Hey, I kind of actually like this stuff.’ That just comes back to awesome people in the ROTC program, and the same with Garland and the Paulsons. They all kind of led me to say what I actually wanted, and that was to serve.”

In recent years, several UVA wrestlers have also gone on to serve in the military after completing ROTC programs, including Dusty Floyd and Dustin Roemer.

“It’s actually a big selling point of our program,” said Garland, who’s in his 16th season as head coach at his alma mater. “It’s not a ton of guys, but every guy that’s gone through it since I’ve been here has loved it, and ROTC has loved them. We try to explain that to kids when they’re looking at military academies. You can get to the exact same place with this.”

Martino said the support he received from “Garland and the ROTC program was unmatched. It’s good for both programs, because wrestling [can save a scholarship], and then ROTC loves it, because the biggest things in the military are discipline and being physically in shape, and wrestling helps with that.”

Both programs worked to accommodate his schedule.

“There’s a lot of trust involved in that,” Martino said, “but it gave me a unique opportunity at I’d say a pretty young age to kind of be my own manager to an extent. I had to split time between ROTC things and practice. Big days were Tuesdays, I’d have to wake up and do [physical training], and then I’d go straight to wrestling. Then I would go to a class or two, and then I would have to lift. And then I would go straight from the lift to our practical exercises with ROTC, which are essentially you in the woods working on your tactics or your land navigation and stuff like that. They were tough days, but the fact of the matter is they got me a lot better at both [endeavors].” 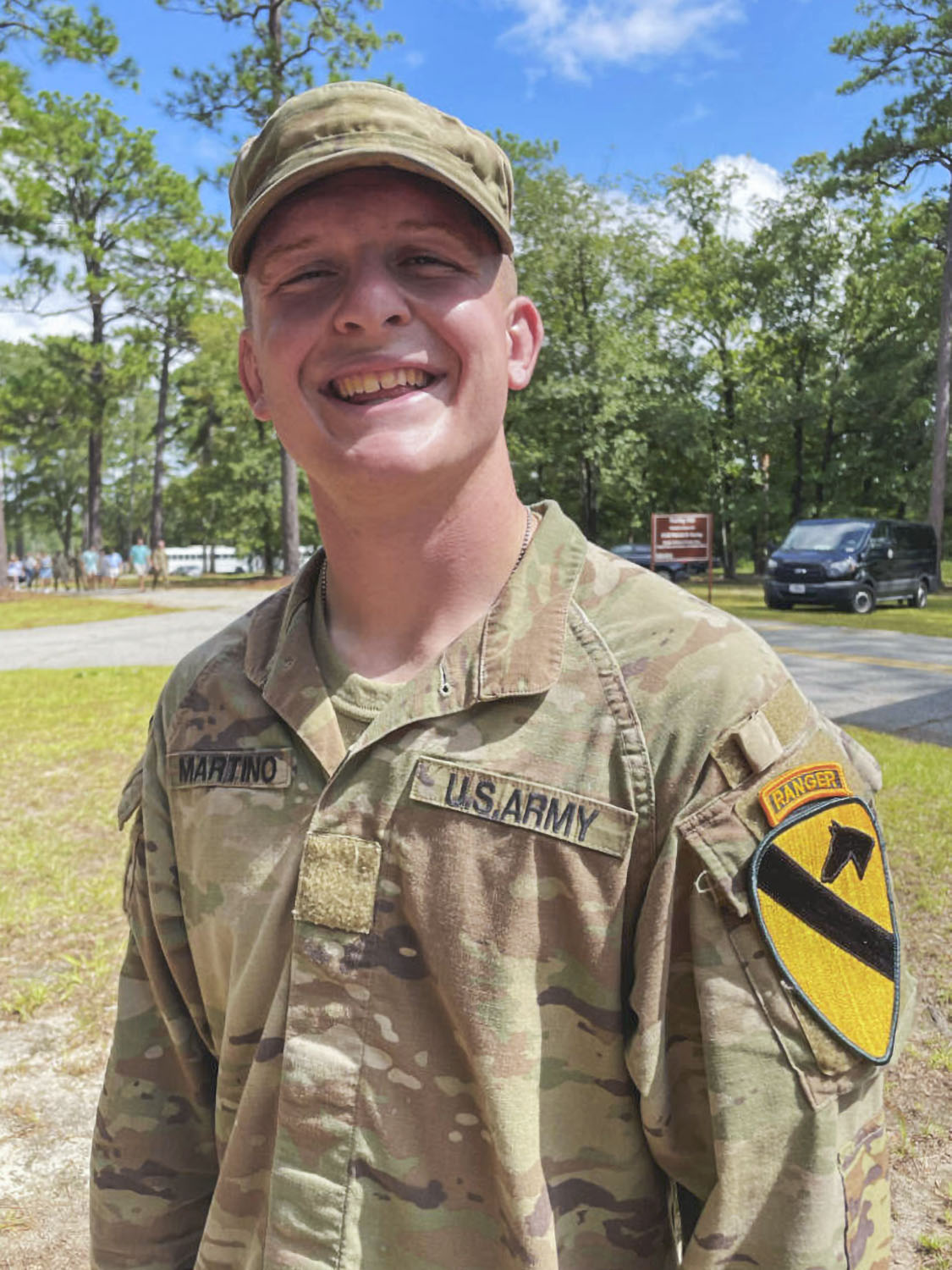 He built lifelong bonds with his teammates at UVA. “The cool thing about the wrestling team, and probably what I miss most,” Martino said, “is the aspect of community.”

Before the start of Ranger School, the Army took away students’ cell phones, so for two months “you’re kind of detached from society,” Martino said. “What’s cool about that, though, is people would write me letters.”

He received mail from former teammates Michael Murphy, Patrick McCormick, Jay Aiello, Trey Lane and Jack Mueller, among others. Martino also is grateful for the support of his girlfriend, Avery Lane (Trey Lane’s older sister), a third-year student at the Indiana University School of Dentistry.

During Ranger School, candidates are allowed to make calls on a pay phone a couple of times, Martino said, “but there’s a hundred soldiers behind you waiting to talk. So it’s like a minute or two. What you really hang on to there is the letters. I have all of mine collected, and I’ve been re-reading them and using that as a support.”

He’ll be in Fort Benning for about another month, Martino said, before reporting to Fort Hood in Texas. “They give you a chance after Ranger School to kind of recover your body and your mind. I expected to be physically hurt after this, because that’s what you expect, but [didn’t realize] the effects of prolonged sleep deprivation and lack of nutrition. I’d say besides just falling asleep all the time, I’m doing pretty well.

“One of my biggest goals was to get down here and get a Ranger tab. Mentally, I’m getting there. I’m definitely happy with where I am and how I’m progressing and I’m excited for what’s next.”

For the first four years of his Army career, Martino will be an infantry officer. He’s “ranger-qualified,” the status attained by students who pass Ranger School, but that doesn’t mean he’s an active ranger. They serve in the 75th Ranger Regiment, the Army’s elite large-scale special operations force.

Martino hasn’t decided if he wants to apply for Ranger Regiment.

“It’s never off the table,” he said. “I’m gonna keep that door open, but for now I’m just excited to get with my platoon, get with my soldiers, and really do what I’ve been training for, essentially for the past five years.”

What Is the ‘4th Side’? END_OF_DOCUMENT_TOKEN_TO_BE_REPLACED