Dreams and Goals: Leah Smith Reflects on Her Journey to Olympic Gold Fourth-year student Leah Smith will conclude her collegiate career as one of the most-accomplished student-athletes in University of Virginia history. She has won four NCAA individual swimming titles – the most by any Cavalier student-athlete – and is a 10-time Atlantic Coast Conference champion and most recently, a double individual world champion at the 2016 FINA Short Course World Championships.

One dream Smith has had since she was a young girl was to become an Olympian, and last summer in Rio de Janeiro she achieved her dream. She became an Olympic gold medalist with the U.S. women’s 4x200-meter freestyle and also earned individual bronze in the 400-meter freestyle.

Just before she was honored at Sunday’s home women’s basketball game against Duke as part of National Girls and Women in Sports Day, Virginia Athletics caught up with Smith to talk about her goals and dreams and what advice she would have for young girls getting into sports. 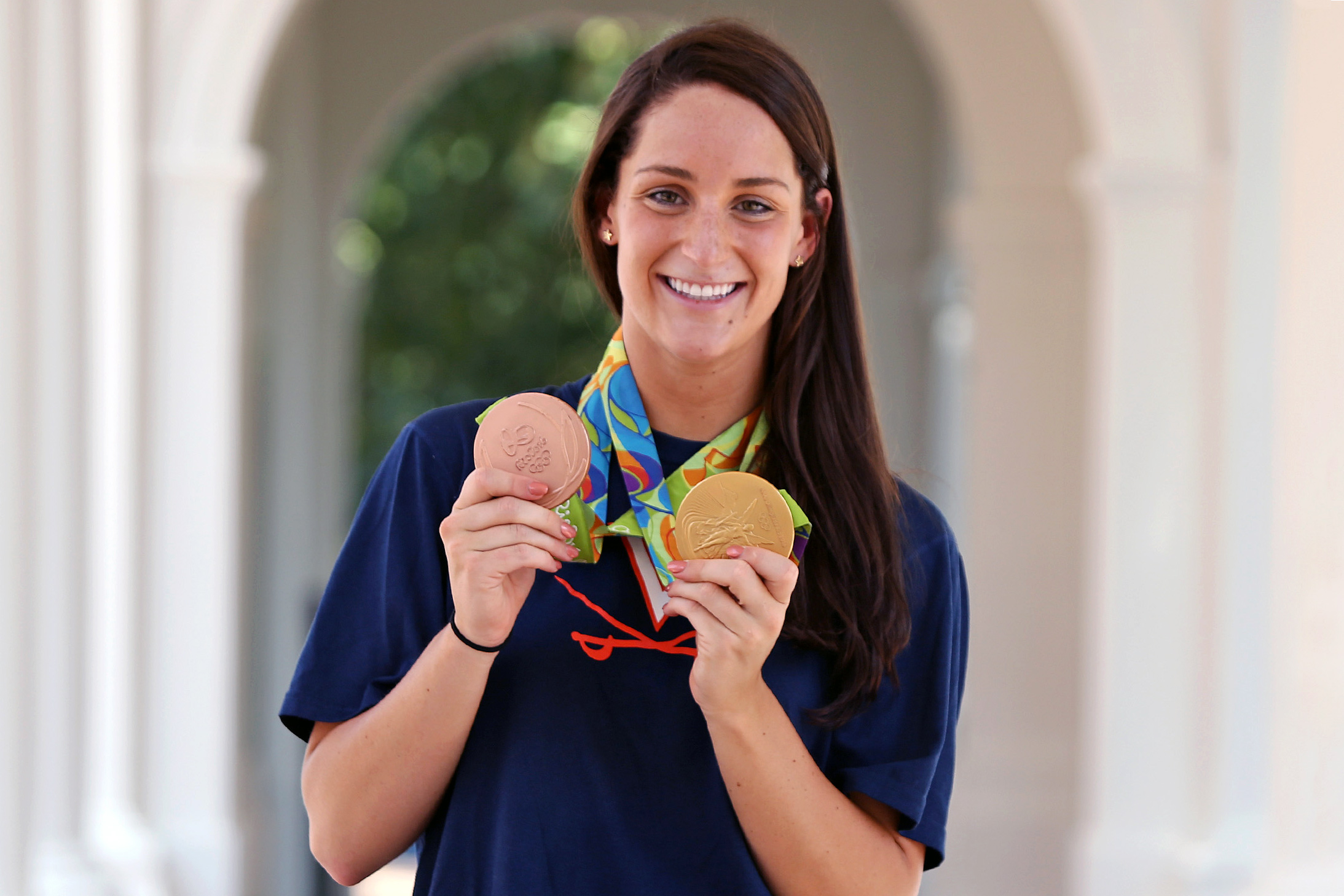 Q. When did you first have the goal or dream to become an Olympian? What other dreams did you have for swimming?

Q. Before you started swimming, did you have and goals or dreams in sports?

A. I started swimming when I was 6, so there were really no sports that I had made any big goals in before swimming. I dabbled in ballet and softball, but I loved swimming the most.

My goals in ballet were to get to wear pointe shoes, and in softball, we just wanted to win the games so that we could get ice cream after.

Q. When you did not make the [U.S. Olympic] team in 2012 or have the performance you wanted at the Olympic Trials, how did that fuel you for the next four years?

A. I was pretty devastated after Trials in 2012 because I thought that at the very least, I would make the finals in all of my events. I definitely thought I had a chance to make it in the back of my mind, even though I was not seeded even in the top eight in anything.

After Trials, I qualified for a junior team meet in Honolulu, Hawaii, and [swam] times that would have made all of the finals at Trials. That was tough, but it gave me the confidence to realize that I was good enough to compete with the best. I used that confidence to help me the next four years.

Q. What types of qualities in your personality and behavior helped you achieve your dreams?

A. I think that there are many things that I have learned from various mentors, role models, coaches and teachers that have helped me to shape my behavior and personality over the years. My parents always stressed how important it was to go to every single practice and never miss anything that was required of me. I think that helped me develop a persistent attitude about swimming where I became willing to do anything and everything to get better.

Q. Having achieved your dream of making the Olympics and being an Olympic gold medalist, have your dreams changed?

A. My dreams have not changed that much after making the Olympics. If anything, I now have more confidence in my dreams. I still have my sights set on 2020 (in Tokyo) and have the same goals for that as I did for 2016.

There’s still some work that I feel I have left to do in college swimming, and beyond that I am just excited for all the new opportunities my pro career will bring.

Q. You are known for your work ethic in and out of the pool. Was that instilled in you from your family?

A. My work ethic was definitely instilled in me from my family. There is such an expectation of excellence in my family – which I love – that always fuels me to do my best. I looked up to many of my older cousins, aunts and uncles for the things they did and I wanted to be great, too. My sister was better than me at swimming for a long time, and I looked up to her so much. I tried to copy her work ethic and learn from her, and I took that with me even after we stopped swimming together.

Q. Why should young girls try swimming or sports in general?

A. I think that young girls should try swimming specifically because there is a lot of equality in our sport. At USA Swimming meets, the boys and girls swim together, one event after the other. The only times that there are separate gender meets are in college swimming, so the support level at USA Swimming meets does not vary depending on who is swimming.

At professional meets, the prize money does not change based on gender. Funding from the USOC depends on your world ranking and not your gender.

So I feel very fortunate to be involved in a sport and an organization that does not have unequal opportunities for men and women.

Q. What advice would you give young girls who are just getting started in sports on how to be the best they can be?

A. I think that young girls should place no limits on themselves when it comes to setting goals. I think one perfect example of having no limits is people who swim like Katie Ledecky. She has broken so many barriers that many thought only men could break, and continuously proves people wrong. She achieved various Olympic Trials qualifying standards in different events as a female, but what was more impressive was that she could have qualified to swim in the men’s event after getting that standard, too.

Q. Why is it important to give yourself big dreams and goals, not just ones that are going to be easy to achieve?

A. I think that if you don’t give yourself a chance to fail, you will never learn anything about yourself and what you are capable of. If you set your goals very high and fail to achieve them, what you did achieve is still likely something great. Setting attainable goals can be helpful, but if you don’t dream bigger than that, failure can be that much more daunting.

What Is the ‘4th Side’? END_OF_DOCUMENT_TOKEN_TO_BE_REPLACED