How would you react in a rollover crash? Tense up and brace? Relax and go with the flow? Would you be wearing a seat belt? Does your car have rollover curtain airbags to minimize the risk of you being ejected from the car or having your head strike an outside object as the car rotates?

How your body responds to such a crash and how your car is designed, along with its safety features – which are based on injuries predicted by crash test dummies – will play profound roles in whether or not you survive the crash and the extent of your injuries.

While rollover crashes account for only about 2 percent of all crashes, they constitute roughly one-third of all occupant fatalities – about 7,500 highway deaths each year in the United States. The annual cost of rollover injuries and fatalities is about $50 billion. Yet, there currently are no crash-test dummies specifically designed for determining how the human body may react to and become injured in this type of crash.

But researchers at the University of Virginia’s School of Engineering and Applied Science, on a grant from the National Highway Traffic Safety Administration, are working to develop a human-like rollover dummy. 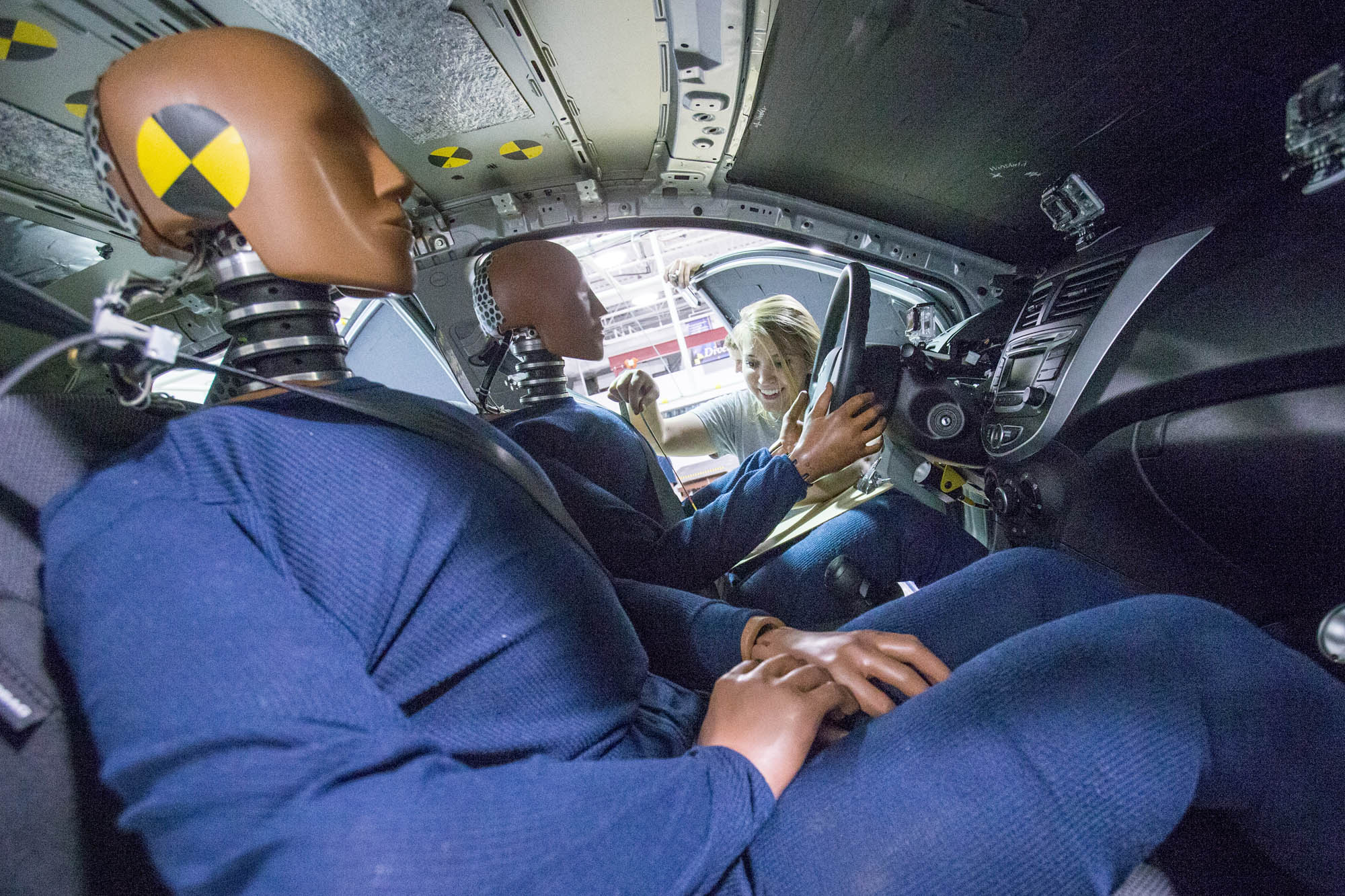 “Rollover is a major public health problem, yet there is no standardized dynamic rollover crash test where we can compare vehicle crashworthiness across models,” said mechanical engineer Jason Kerrigan, who has developed a unique full-scale indoor rollover crash test sled system. It can rotate a sport-utility vehicle – the type of vehicle most susceptible to rollovers – at 400 degrees per second and drop it onto a moving roadbed, simulating a rollover accident.

Kerrigan is a professor with UVA’s Center for Applied Biomechanics, which applies theories of mechanical engineering to understanding how the human body is injured during traumatic events. He used a $5 million grant from the U.S. Department of Transportation to design the system, and $2 million from car manufacturers to study and assess occupant injury risks and vehicle structure crashworthiness, and for model development.

“Rollover crashes can take up to 10 to 15 seconds to complete as a vehicle rotates and makes often repeated strikes on a roadway – a long period of time for a person, or dummy, to be undergoing those kinds of circumstances,” Kerrigan said.

“When you’re in a car that is airborne and rotating, your body is being drawn up toward the roof with up to four times the force caused by gravity. You’re upside down or you’re on your side, or you’re at an angle and when you hit, it’s going to be a severe impact. We’re trying to understand that as well as possible through precise and repeatable tests.” 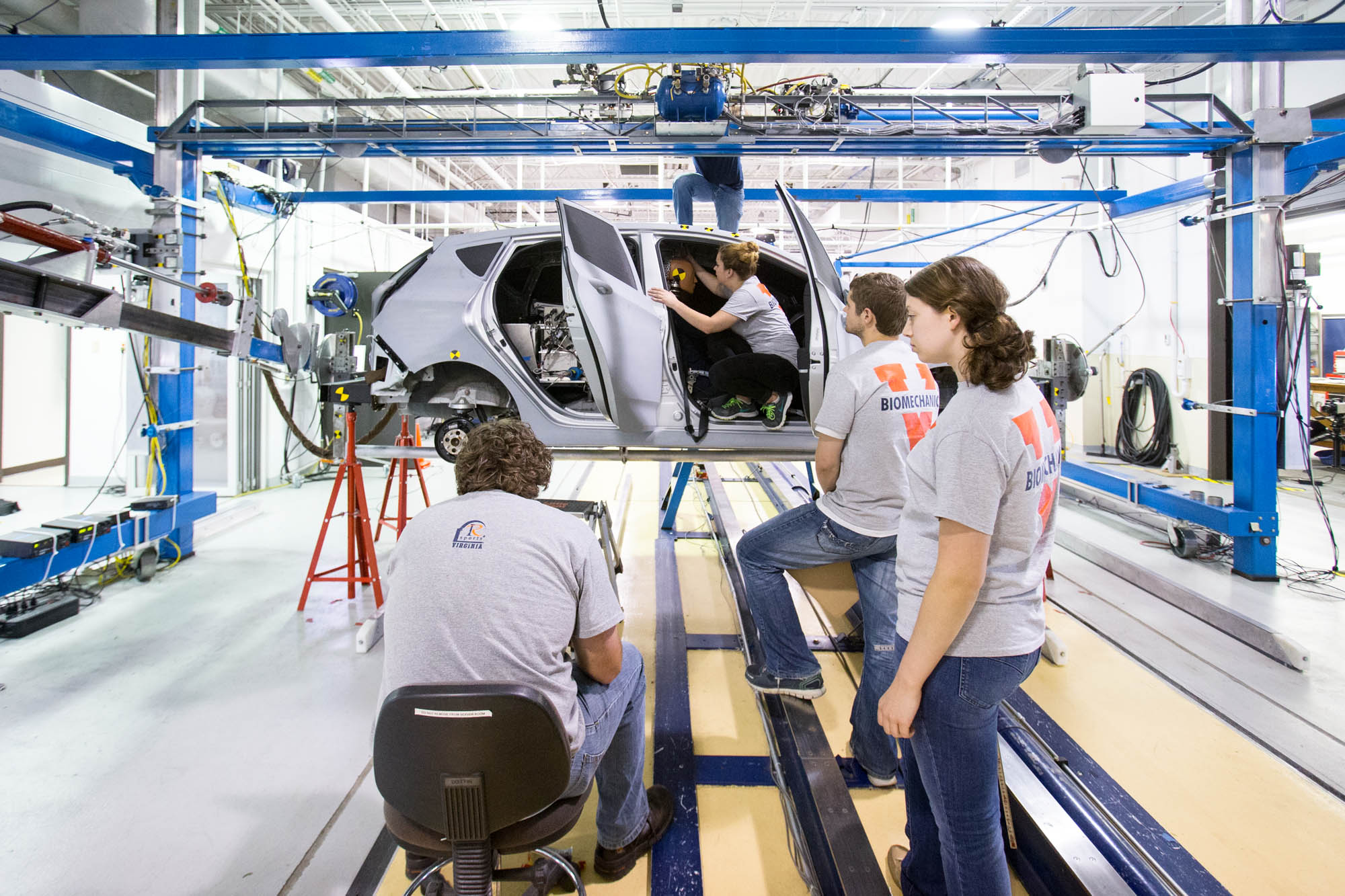 Data from that testing is helping Kerrigan’s team delve into how to make a better dummy, one that will be humanlike, or “biofidelic” – mimicking as much as possible the size, shape, weight and flexibility of an actual person undergoing the prolonged and unique stresses of a rollover crash.

“Manufacturers design and tailor the crash safety features in their cars – such as airbags, seats and seatbelts – based on how crash test dummies respond in various scenarios, such as rollovers,” said Qi Zhang, a Ph.D. candidate with the biomechanics center who is developing a dummy specifically for testing and predicting injury risk in rollover crashes. “One of the things I’m doing is adding more elements and sensors to current dummies to emulate the flexible human spine, and to eventually also create active muscle structures that can respond to stresses in the same way human muscles tense in a crash.” 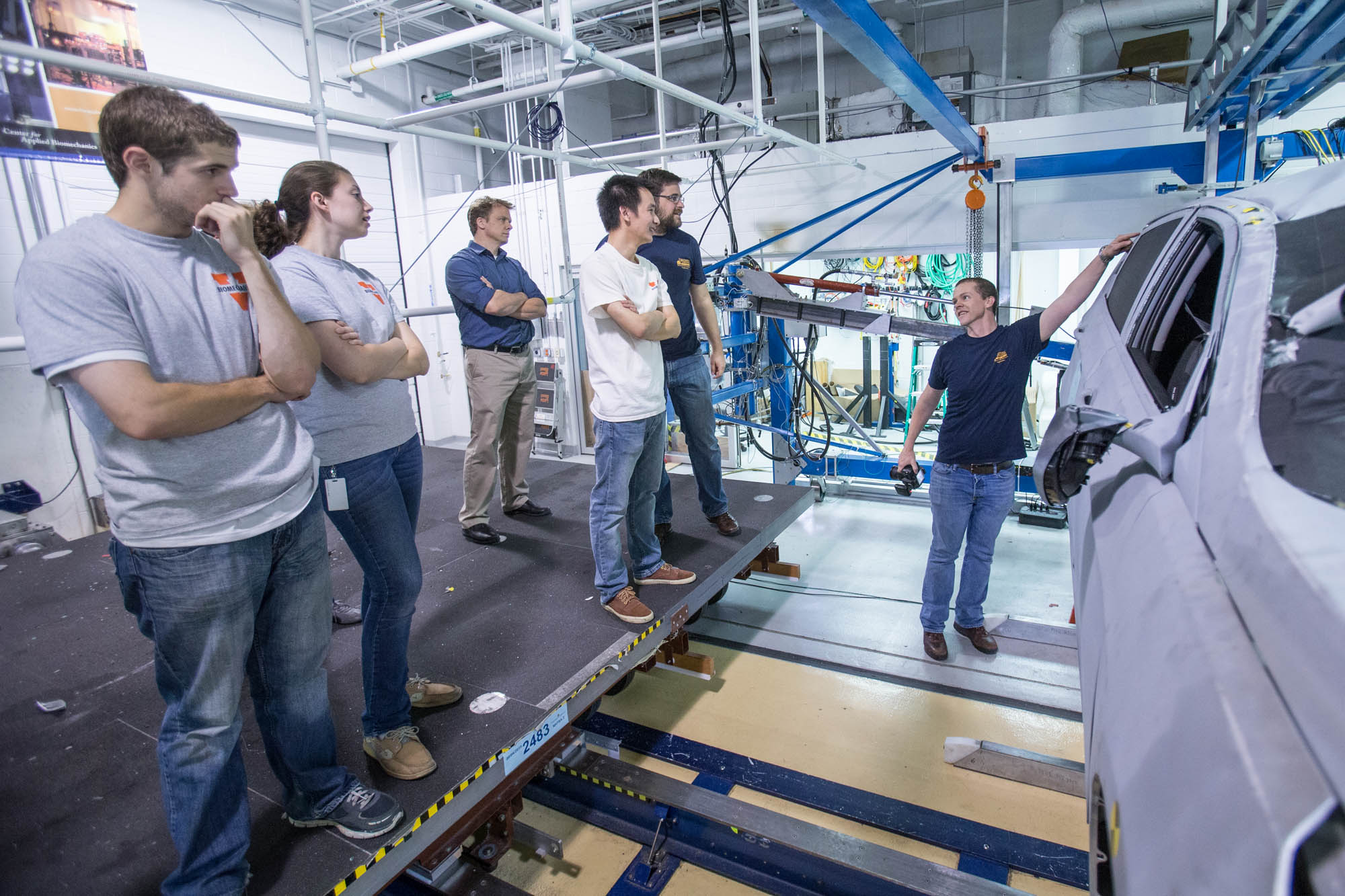 Zhang is using computational modeling, based on his data, to design the specialized dummy. Interestingly, dummies currently used to study rollovers were designed only for frontal crashes – impacts that happen in hundreds of milliseconds and then are over with – and are ill-suited for understanding or predicting injury risk in rollovers. Zhang said rollovers present a particular challenge to dummy design, in that vehicle occupants move into different positions and postures as the vehicle rotates, resulting in damage to the side or top of the head as the vehicle’s side impacts the road, turns and the roof hits the road and compresses.

“One of the most important results we’ve seen is that the human spine extends, straightens and aligns itself with the acceleration vector in a way we have never seen in other types of crashes,” Zhang said. “This puts the human head close to the roof, and closer to injury, at the time the roof gets impacted by the ground when the vehicle rolls over.”

Zhang expects to build, based on his computer model, a rollover dummy prototype sometime next year.

“Our ultimate goal is to learn how to protect people in rollover crashes,” Kerrigan noted. “What we learn in this lab is of great use to automobile manufacturers, researchers at other test facilities, and can be used for vehicle design improvements to eventually substantially reduce death and serious injury from these types of crashes.”

Ahead of Thanksgiving, Hoos Look Back With Gratitude END_OF_DOCUMENT_TOKEN_TO_BE_REPLACED

The Cavalier Marching Band Marches On – Even When Apart END_OF_DOCUMENT_TOKEN_TO_BE_REPLACED